On Friday, June 22nd, a Portlaw man I’ve known my entire life did something quite extraordinary on a relatively unremarkable stretch of mid-Kilkenny road.
John Keyes, one of two elder brothers of mine, took to his racing bike and completed 80 trips (each three kilometres long approximately) up and down a hill in Kilmanagh, four miles outside Callan.
John took to the saddle at 4.30am and didn’t complete his challenge until just shy of 2.30am the following morning.
During the challenge, John cycled and bettered the equivalent measurement of Mount Everest – 8,848 metres (29,029 feet in old money) – a distance completed by his 78th circuit.
That would have been enough for most of us but not for John, who stated: ” I’d advertised this as an 80 lap challenge though so two more before I was done. This wasn’t to prove anything to other people, this was in my head. If I didn’t do 80 I’d have been disappointed in myself, as silly as that sounds.”
Silly? Unquestionably as far as most of us would be concerned, but to John, and knowing him as I do, utterly explicable. He’s never been a man to do anything by halves, has our John, which gives some insight into not only the levels of his dedication, but the depth of his integrity. 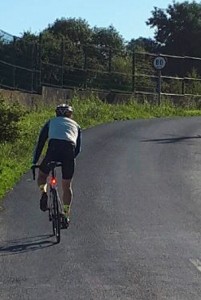 John Keyes (an elder brother of mine) pictured in the middle of an extraordinary fundraising cycle he undertook on Friday, June 22nd. | Photo: Kevin Keyes (my younger brother!)

John didn’t take on this attempt for either a jolly or mere self-fulfilment. Three more than worthy causes will benefit from his ‘Everesting’, namely:
* KASA, previously known as the Kilkenny Rape Crisis Centre
* The Waterford Rape & Sexual Abuse Centre and
* The Dublin Rape Crisis Centre.
“Sexual violence is a major issue in Ireland,” he wrote in a lengthy blog detailing his cycle, “and we need our young men and women to receive sufficient education to explain what exactly consent is, to help reduce sexual coercion and assault.”
He added: “I suffered a lot during my bike ride, both mentally and physically. This suffering was my choice. I was in control of the situation, and I knew my suffering would be over soon enough. A victim of sexual assault does not have this choice. They have to be incredibly brave to reach out for help. They have to be incredibly brave to report the assault to the Gardaí.”
John continued: “They will in many cases be called liars, attention seekers, and worse. They will have their personal lives investigated and have many private details that are irrelevant to the case at hand, exposed in court. They will be ripped apart and regardless of a judgement they will be affected for the rest of their lives.
“That’s why these organisations are so important. To tell people it’s not their fault. To explain to girls and women that it’s not because they wore a short skirt. To be there for them when reporting the crime. To be there with the victims in court, so they know they have someone in their corner.”
John correctly pointed out that his suffering that day was nothing that a good bath and rest would amend in due course, victims of sexual violence cannot so easily discard their own physical traumas and get on with life with switch-flicking dexterity. If only that were so.
Nonetheless, what John achieved over the course of 22 extraordinary hours represents a feat beyond most of our physical and mental comprehensions. We’re talking Tom Crean levels of endurance here.
Four hours in, John was joined by our youngest brother Kevin, who ran alongside John, prompting the Everesting aspirant to describe him as mad, “but who the hell; was I to think something like that!” Each round trip took approximately 10 minutes to complete and over the course of the day, John didn’t lack for company, with friend and occasional cycling companion John Twomey joining in for 14 repeat trips up and down the hill over six hours. Carrick-on-Suir CBS school mate John O’Keeffe (who once regaled a rugby dressing room about waking early to witness a sunrise) also popped along to offer support and good humoured jibing, while brother-in-law Ross Clery and eldest brother Gavin also made it to Kilmanagh.
Hands up, this columnist was conspicuous by his absence, but I threw a few bob John’s way, so I proved financially helpful though physically useless on this occasion.
By tea-time on a searing Friday, John’s family – wife Olivia and children Ellie and Shane – arrived along to offer a timely boost, in addition to a “great big dirty Supermac’s chicken burger and chips…(and) it did the business!” By 8pm, John was 60 laps in as the light began to fade, with brother Gavin driving ahead of both John and brother-in-law Ross on a road which was now thankfully emptying of tractors and silage loaders.
By 12.49am, having downed a quarter pounder Ross had successfully tracked down, John had just five laps remaining.
“It was around this time I got a big scare coming back down off the hill. A cat ran across the road in front of me, in an unpredictable manner of course. I braked as hard as I could and I’d say there was about a foot between us as I passed it. This banished any danger of me becoming complacent.” Thereafter, the road rose with John and by 2.20am, with Ross (another man of incredible integrity) back on the bike, the challenge was successfully completed. Said John: “A lovely woman who’d been supporting me all day, and offering me tea and water and whatever, was out at her front door and she clapped us off the hill. It was lovely. A fitting way to bookend the adventure.” What an adventure. What an accomplishment. And to think my big brother did this. What a man.
If you’d like to contribute to John’s successful Everest attempt, please visit https://johnkey.es/charity-everesting/