Eye On Nature with Albert Nolan

Oh Chrsitmas Tree!
Scent is a powerful memory, and one that changes with the seasons. From summer flowers to the damp autumn leaves, walks in the great outdoors are enhanced by our noses. For me the festive season, will always be associated, with the resinous scent of pine trees. Our Christmas tree was placed in the front hall, and as we came in from school, the first thing we would see was its twinkling lights. When the tree was freshly cut the smell of pine would waft up the stairs, and greet us first thing in the morning.
Christmas trees are an integral part of the celebrations, and their history is long and complex. For many pagan cultures, the evergreen fir was as sign of the cycle of life, and a reminder in the depths of winter, of the warmer days to come. 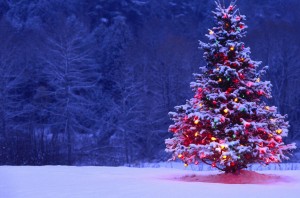 They would cut and decorate their houses with branches from the tree, and I would also think they enjoyed the pleasant and cleaning scent. These were hung from the ceiling in the house, and Santa must have been a must have been less rotund in those days.
The Romans had their festival of saturnalia, in honour of their god Saturn. He was the god of agricultural, liberation and time, and gift giving and partying went on for many days.
Tress were venerated by many ancient communities, not only for the material and food they provided for people, but also as homes for birds.
Native trees were also used during the solstice period, and hawthorn and cherry were two favourites. These were cut and put into pots, in the hope that they would start flowering, and this was a good omen for the year to come.
If you could not afford a tree one was made out of timber, and decorated with fruit and paper flowers. This was often carried around to be shown to other houses, and I am sure there was a healthy dose of competition. These trees were often placed outside churches and used to tell bible stories to a mainly illiterate community.
The first modern use of Christmas trees is attributed to the 16th Century preacher Martin Luther. The story goes that he was walking home one frosty night, and noticed the stars twinkling through the snow laden branches of a conifer tree. He found it so beautiful, and it reminded him of baby Jesus that he returned with his family, and brought the tree into his house.
These trees were decorated with apples, flowers made from paper and perhaps sweet treats like ginger bread men.
Tinsel was a later addition and there is a lovely story about it came into use. A poor family, who could not afford to decorate their tree, went to sleep one night. As they rested a spider came along, and spun his webs all over the tree. These turned into golden and silver threads, and the family awoke to a beautiful surprise.
Went you are finished with your tree, they can be left to season, and make a quick burning wood for the fire.
A friend of mine who lives in Kentucky, and works for the wildlife department, uses the trees in ponds and lakes as nurseries for small fish.
Of course all of these stories are not the real reason we put up trees. As any young person knows it is place for kids to climb, have a good argument over who puts the start on top and of course a place for Santa to leave his presents.
A Slug’s Tail
My kids have become more aware of slugs over the last few weeks. As we walk to school after another wet night, we find plenty of slugs on the walls of the houses, and along the fence, that runs the entire length of the path.
These come in various shapes, sizes and colours, and if they don’t find a secure resting spot for the day, they will quickly become breakfast for awakening birds.
Around our house we also find lots of slugs. During the daylight hours, they like to hide in the coal bunker, and many an unfortunate slug, has been slow cooked on the open fire. They are quite large and green, and I think they are called Zebra slugs.
The outdoor cats are also fed out the front, and at night-time you have to be careful of where you walk, as the slugs are attracted by any leftover food. Their mucus trails can be seen in the morning, and I am always surprised at how many and how active they are. These trails often lead up into trees, and to the top of the house. 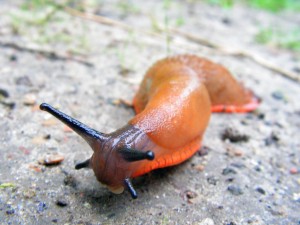 While to our sensible hands the slime or mucus might feel disgusting, it has many useful properties. It helps protect the slug’s soft bodies, as they travel over rough surfaces. It’s also aids navigation, as they can follow the trail back to their hiding location.
It falls far short of Michelin standards on the taste buds, and this makes a fairly effective defence against birds! One bite and they will spit out the slug, but with practice birds can overcome this, and you will often see birds, carefully cleaning slugs on grass, before eating. Hedgehogs who eat a lots of slugs don’t seem to be bothered by the slime.
We were also finding slugs in the upstairs corridor of the house, and many of these were dried out and near death. The kids loved rescuing them by dropping them out the window into the garden. I had the suggestion of the toilet, but the look of horror on their faces, put paid to that idea.
The windows upstairs are around 30 years old and timber framed. They have the old fashioned drainage holes on the inside that you have to free up every so often with a bit of wire. The slugs were crawling in these tunnels and getting lost.
They also gather around the bird feeder against the window at night-time and are more than likely feeding on the droppings that are high in nutrients.
Slugs are nature’s decomposers and unfortunately for us their job description doesn’t distinguish between wild and garden plants. Their rough tongue covered in over 27, 000 tooth like projections is perfectly designed for munching through leaves and fruit. They are a great addition to the start of a compost heap, helping to break down material, for smaller creatures and bacteria to complete the process. Slugs are a big part of the diet of birds and animals and are also eaten by frogs and beetles.
If you spend a few minutes and examine a slug you will see that it has two pairs of tentacles. The longer pair has the eyes at the end while the shorter ones are used for feeling and tasting.
A wide diet from lichens, mushrooms, fruits, plants, vegetables and some are predators of other slugs ensures they can survive in most habitats.
Slugs evolved from snails and their hard shells disappeared over countless generations. Some still have vestigial shells inside their bodies. This lack of a hard rigid shell must have given them some big advantage for slugs to become so common. Perhaps the ability to squeeze under stones and through other tight gaps gave them access to another food source of protection from predators.