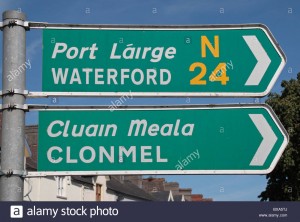 Councillors have issued renewed calls for additional signage in rural areas of County Waterford.
At the May plenary meeting of Waterford City & County Council, Cllr John O’Leary (FF) outlined the need for increased signage across the county.
“We’re at a huge loss in relation to signage, in particular in rural areas,” he said.
“There are people who can’t find their way around rural parts of this county.”
He called on the newly appointed Minister for Rural Affairs Heather Humphreys to address this issue and give “more cognisance to rural Ireland”.
Cllr O’Leary said he wanted the council to undertake a campaign to erect increased signage, adding that signage provided landmarks and also promoted and preserved people’s identity.
Cllr M J O’Ryan (FF) highlighted the need for new signage at county boundaries which would welcome people to County Waterford.
“Some of the signs on roads coming into the Déise are dilapidated, rusty and broken,” he said.
“If people are driving into County Waterford they have to get a good first impression,” he added.
Cllr O’Ryan highlighted Waterford’s many attractions and the opening of the Waterford Greenway.
He asked for a signage grant from “central coffers” or from the council’s own resources.
Director of Services Paul Daly said the council was engaged in a process in relation to signage on approach roads into both the city and county.
He said Waterford City & County Council aimed to have “consistent, decent, clean signs”.
Cllr O’Ryan asked that the council liaise with councillors in relation to the placement of any future signage that the council would erect.
Cllr Mary Roche (Ind) noted that she had seen the council washing road signs around the city which was welcomed.
Meanwhile, councillors voted in favour of a motion calling on Waterford City & County Council to provide signage informing those entering the county that Waterford is home to a Gaeltacht area.
Cllr Lola O’Sullivan (FG) proposed the motion and explained that the suggestion had arisen from discussions involving the 1916 commemoration committee.
She said the fact that Waterford has a Gaeltacht area is “something we as a city and county should be very, very proud of”.
Cllr Jason Murphy (FF) seconded Cllr O’Sullivan’s proposal and councillors voted in favour of the motion.