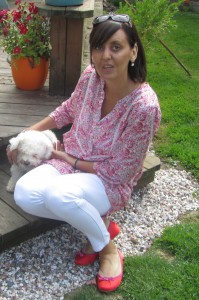 Jennifer Pheasey, who has expressed her disappointment that 24/7 cardiac care has yet to be secured at UHW.

A HEART attack survivor has expressed disappointment that 24/7 cardiac cover at University Hospital Waterford (UHW) has still not been obtained.
Jennifer Pheasey and her family have expressed dismay that the situation at UHW has not improved since they first highlighted it last year – despite the formation of the ‘24/7 Cardiac Care for Waterford and the South East’ campaign group.
“The positon hasn’t improved since last April when Jennifer got her heart attack. She’s very upset because she had hoped that progress would have been made in that time,” said Jennifer’s father Willie Doyle.
On Friday January 16th last, after visiting her doctor as a result of suffering serious chest pains, Mrs Pheasey was immediately sent to UHW.
However, by the time she arrived at the cardiac unit, it had closed for the weekend.
As a result, Mrs Pheasey was placed in a ward for the night to be assessed and was advised that she may be transferred to Cork during the night.
“She was told that if her condition deteriorated she would have to be moved to Cork. It was a very bad night with heavy frost. Fortunately her condition didn’t deteriorate but it didn’t improve either,” explained Mr Doyle.
“She spent the weekend in the ward and was assessed and underwent tests when the cardiac team was back on duty on Monday. They couldn’t do all the tests on Monday because of the backlog of other cardiac procedures,” he added.
After her medication was altered, Mrs Pheasey was eventually discharged on Tuesday January 20th.
“There’s a great expense to the system because she took up a bed over the weekend, whereas if the cath lab had been open on Friday evening they would have been able to do the tests and adjust her medication and she may have been able to go home on Saturday,” said Mr Doyle.
He has again written to the Minister for Health informing him of what he calls “the inadequate cardiac care services” at UHW.
After Mrs Pheasey suffered a heart attack last year, Mr Doyle and his family were shocked to discover that the cath lab at UHW is only open Monday-Friday from 8.30am – 5.30pm.
Mr Doyle was among those in attendance at a meeting in Leinster House last month where a petition with thousands of signatures calling for 24/7 cardiac cover for Waterford and the South East was presented to the secretary of Minister Varadkar.