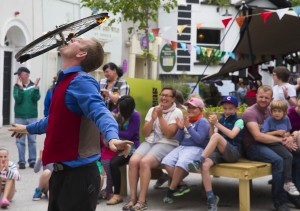 The 'Wobbly Circus' in action during Summerval.

A proposal to increase the budget for next year’s summer-time Summerval festival to €350,000 generated a heated debate at the October meeting of the Metropolitan District, with one Councillor saying he was ‘distinctly underwhelmed’ by the 2016 event and the festival’s chair admitting that he was the its ‘greatest critic’.
The inaugural Summerval – promoted as the cousin of Winterval – ran every weekend from June 24th until September 4th and incorporated a range of established and new family fun activities, sporting events, live music gigs and art workshops into its programme, the majority of them free.
At the meeting, Summerval Chair Barry Monaghan concurred with many councillors that the festival was “overly ambitious” in trying to promote a ten-week initiative in its first year. However his proposal to increase the budget to €350,000 next year raised several eyebrows.
Councillors were told that Summerval had cost €140,000 in 2016, in comparison to the €40,000 previously allocated to the ‘Summer in the City’ summer entertainment initiative.
Mr Monaghan said Summerval had promoted two specific events, Spraoi and Waterford Walls , at a cost of €10, 500, while €75,000 was spent on new events.
As a result, he said, many smaller initiatives such as the Brian Ború sailing cruise, the Suir Valley Railway, Curraghmore and Mount Congreve, were given a platform. Promotion was via the circulation of 140,000 brochures and via a website.
Mr Monaghan noted that more than half the cost of the weekly music gig at Bailey’s New Street was funded and this event grew every week, as did the Artbeat gigs.

‘A drop in the ocean’
However he said the €50,000 allocated for promotion was a ‘drop in the ocean of what you’d need to spend to get the message out’, adding that there was a ‘crowded market place’ in terms of the many summer offerings. “And, when the weather is good, Waterford goes to the beach”, he commented.
Mr Monaghan described to the councillors how Summerval had a deliberate ‘slow start’ because the launch coincided with the Dunmore East Food Festival, followed by the Promenade Festival in Tramore and Daytripper.
“By July, it wasn’t news any more”, he noted. However Mr Monaghan remains optimistic that there is potential to develop Summerval in Waterford, capitalising on the new Greenway, the Purple Flag status, an improved shopping offering, Ireland’s Ancient East and the screening of ‘Eastenders’ spin-off ‘Redwater’, shot in Dunmore, which will be aired in the Spring of 2017.
In 2017, he proposed that €50,000 be allocated for events in each of the city, Tramore and Dunmore to organise a weekly strong event in each location, with €200,000 to be spent on national promotion.
“We need to increase the budget to make it work, if we did there could be a huge social and economic diffident”, Mr Monaghan said, before noting: “I am aware there are so many other funding proposals…this plan is the utopia.”
“This year’s Summerval was too ambitious and failed to deliver because of this but the principal is very strong. If Waterford joins the dots, it could bring a massive economic boost going forward.”
Cllr Eddie Mulligan (FF) was especially forceful in his criticism of Summerval, complaining that the “committee didn’t listen at the start”. “If they had, they wouldn’t have made the mistakes. This reinforced the need for a city manager”, he said.
“We could have had two staff from a marketing and operational background on the cost of €140,000. The Council has spent a number of years developing the Waterford brand, this has taken it back.”
Cllr Mulligan said there was ‘no co-ordination’ with the organisers of the ‘Boobs and Balls’ charity event in John Robert’s Square, while the “branding on Artbeat took away from it”.
Criticising the fact that ‘alcohol-related sponsors’ were used at the Bailey’s New Street stage, Cllr Mulligan said all screens and stages should have been centralised in John Robert’s Square.
‘Money well spent’
Disagreeing with Cllr Mulligan, Cllr Cha O’Neill said Summerval was “money well-spent”, adding that he had met many people who enjoyed its offerings.
“I would hate to knock it, there is an opportunity here – like an infant starting to walk. We have to try something to get people in.” However Cllr O’Neill suggested that the stage in John Robert’s Square should have been removed when not in use, midweek. “It was an eyesore during the week, with no action on it”, he commented.
Cllr John Cummins (FG) said he was surprised by Cllr Mulligan’s comments. “I said when allocating funding that it was a very short lead-in period for any organisation to put on a festival but we, as Councillors, shouldn’t be carrying out a hatchet job on people who gave time freely to try better our city and attract more people in.”
Noting that Summerval “added to the atmosphere” in the city centre, Cllr Cummins said it had created something to ‘build on’ in 2017 and there was great merit in ‘having all events marketed under the same banner’.
Cllr Joe Kelly (Ind) agreed, commenting that ‘anybody who puts in that work voluntarily has to be congratulated… the country would fall apart without people like Barry Monaghan’.
However he also acknowledged the sentiments of Cllr Mulligan, saying Summerval “didn’t work this year” and the idea hadn’t been “thought through properly”.
“My perception on the ground was that it wasn’t terribly successful, going on the numbers at events in Bailey’s New Street and John Robert’s Square”, he added. “And we can’t afford to take a punt on €140,000 of tax payers money.”
‘Distinctly underwhelmed’
“Echoing this, Cllr Joe Conway said he was ‘distinctly underwhelmed’ with Summerval. “If the population of Tramore was 10,000, I’d be surprised if 100 knew what Summerval was”, he continued. “It had no impact in Tramore. Summer is a time to market the great outdoors, we should be trying to market our coastal infrastructure, not bring them into the city.”
Noting the €40,000 in sponsorship from Showerings, Cllr Conway said he’d “love to know whether this was a cash allocation or subvention on alcohol”. “To give away €100,000 of public money, we should be getting a seriously audited report to show what it was spent on”, he added.
Responding to a query from Cllr John Cummins, Economic Development Officer Billy Duggan confirmed that no other festival suffered a funding cut because of the €100,000 allocated to Summerval. “If an event didn’t get funding, it was because they didn’t meet the criteria, not because of Summerval”, he noted.
Cllr Mary Roche (Ind) said she didn’t agree with “knocking Summerval”. “If a private citizen is willing to invest time, this is a very positive thing. I got a mixed reaction but Barry has acknowledged that things could be done better. But I’m not sure trying to pull people into the city when the sun is shining is a good idea.”
Cllr Roche added that the key mistake was trying to add to existing offerings instead of co-ordinating everything that was already organised in the area. “We should have put the €100,000 into marketing, it’s what we miss in Waterford”, she said.
Cllr Blaise Hannigan (Ind) agreed with previous comments that the festival’s ‘lead in’ time was too short, while Cllr Pat Fitzgerald noted that Waterford City & County Council was spending more than other local authorities on festivals.
Cllr Sean Reinhardt suggested organising a large event for early in June and then “saturating people with everything else going on”.