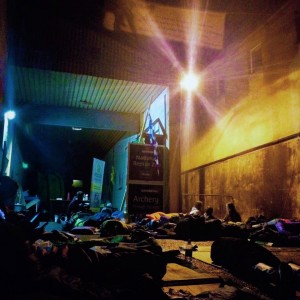 The Big Deise Sleep Out for Focus Ireland on Friday last was a night well spent.

“Lights will guide you home, And ignite your bones, And I will try to Fix You.” -The High Hopes Choir (Friday, December 9th, The Quay, 10.30pm)

To hear someone openly talking about wanting to jump into the Suir a few hours previously, and then turning to the person she subsequently phoned who persuaded her to keep living, is jarring. It’s not natural. It’s not how things should be.
Homelessness is a jarring development in 21st Century Ireland. It too isn’t natural. It too shouldn’t be. But, as we’ve heard more than once in political chambers of late, we are where we are. Indeed, it’s become the go-to quote once a TD appears to near the end of an original thought.
In the company of almost 40 others, I spent Friday night in a sleeping bag, atop cardboard bedding supplied by Affordable Luxury, in support of Focus Ireland’s Big Deise Sleep Out. One night a year under the stars is not too onerous a task, let’s face it.
And it’s fair to assume that all who assembled at the Sorting Office site on The Quay, currently housing the Winterval Reptile Zoo during waking hours, were given a reminder of their good fortune as members of the High Hopes Choir shared their stories.
To hear what some of the choir opted to share, about wanting to end it all, about being without a home since the age of 14 and spending months at a time in a tent, to someone who won’t be spending Christmas Day with her family, was moving, profound and humbling. It further contextualised those issues in life which have greyed my temple.
And then the choir sang, we listened, then we laughed and all sang again together, giving Aslan’s ‘Crazy World’ a decent airing. We mingled, chatted, shook hands, had a cup of tea and enjoyed each other’s company. The reason for the night was doleful, the cause it highlighted difficult to digest given the scale of the problem nationally, but it’s a necessary night, and one I welcome.
And for those few hours on The Quay, in the shadow of the magnificent red-bricked Clyde Shipping Building, there was a great sense of equality at work; there wasn’t a hint of the class system by which we are all stereotypically pigeon holed at play. It felt good to be there.
And when we bedded down, everyone present was literally on the level – apart from a neighbourhood feline who frightened the bejaysus out of me at around 2.30am when leaping onto my chest!
Thanks to the pleasant persuasion of Focus Ireland’s Waterford team, along with one of our city’s many adopted sons, former City Archivist Donal Moore (undoubtedly one of the brightest men I’ve ever met), a few bob was raised on the night too. And it will all help.
Focus Ireland have had a presence in Waterford since 2000, and the city represents the largest hub for its services outside of Dublin, according to Fundraising Initiatives Manager, Rebecca Reynolds.
She stated: “We provide over 220 houses in Waterford city and county, we provide tenancy support and sustainment services, educational services, childcare facilities and one of the key differentiators to our service, among other homeless agencies, is that we provide a key worker to everybody that comes into our services, to work with that person or family, to help them through the difficulties that they’re experiencing and hopefully move them on from homelessness.”
This is Rebecca’s third Christmas working with Focus Ireland, and she relayed some disturbing statistics regarding the escalation of homelessness since Winter 2014. “Nationally, two years ago, the (Government-recorded) national figure was 3,500, last year it was 5,000 and this year it’s nearly 7,000,” she added, “and it’s a sad indictment of our society that that figure is going in the wrong direction. We’re working hard to help everyone who is in that situation, and the reality is that it’s more families and children now that are being affected by homelessness more than anybody else.”
And that contention is supported by the latest Oasis Housing Association Report (which we covered in last week’s edition) which revealed that in 2015, “almost 41 per cent of adult bed nights were taken up by homeless women. Over the year we were unable to accommodate 41 adult women and 60 children and other arrangements were made to place these with other agencies or with our sister services in Clonmel, Kilkenny or Wexford. Unfortunately, we were generally unable to oblige when these services made reciprocal requests.”
Sadly, the spectre of homelessness doesn’t stir the average punter like an alarmist front page piece about a territorial line (plotted by our past colonial rulers, lest we forget) and that’s a failing of individual citizens as much as it is an illustration of opportunistic, journalistic hyperbole.
However, to see so many Transition Year students from both Ard Scoil na Mara and Mount Sion actively engaged in last Friday’s Sleep Out, gives me cause for optimism about our future.
Rather than engaging in the ‘back in my day’ revisionism any of us closer to 40 are surely all guilty of waxing upon at one stage or another, it’s worth saluting the students who are engaging in active citizenship.
And it’s always worth applauding teachers like Mount Sion’s Bill Doherty for nurturing such a civic perspective in our youth.
Because if the goal of any generation entails creating a better one than the one that they grew up in, then we’re going to need their ingenuity, wit and intelligence to ensure homelessness, and fundraising sleep-outs, are consigned to history.
Forget New Politics. Think New Citizenship instead. Do your bit. That, to me, is the only patriotism worth extolling.