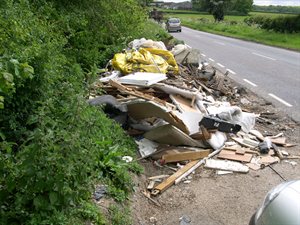 A LINK exists between the increased level of dumping across County Waterford and Waterford City & County Council’s abolition of the bin waiver scheme, according to a local councillor.
Concerns over littering and dumping once again dominated the latest meeting of the Comeragh District of Waterford City & County Council.
Cllr Declan Clune (SF) described the amount of rubbish between Fiddown and Kilmeaden as “horrific”.
“For anyone coming into County Waterford from South Kilkenny or Tipperary the first thing they’re greeted with is a horrific amount of rubbish when they come over Fiddown Bridge,” he said.
Cllr Clune said he had been raising the issue for more than a year.
“It’s only getting worse,” he said.
“At this stage, I want to see if we can take some action rather than just talking about it every month.”
He also highlighted large scale dumping in Portlaw woods and asked if Waterford City & County Council had contacted Coillte.
He described the dumping (which includes car seats and washing machines) as “absolutely disgraceful”.
He suggested that a “correlation” exists between the increase in dumping and the decision by Waterford City & County Council to scrap the bin waiver scheme in 2014.
At Waterford City & County Council’s budget meeting in November 2014, councillors voted to accept the budget estimates for 2015 by 19 votes to 13.
The decision resulted in the privatisation of the council’s refuse collection service and the abolition of the waiver scheme.
In response to Cllr Clune’s concerns, Luke O’Brien (Administrative Officer, Environment) said Waterford City & County Council had spoken with Coillte in relation to Portlaw woods and had asked the company to improve security entrances.
“The council’s environmental inspectors keep the situation under surveillance but it’s an ongoing problem,” he said.
Senior Executive Engineer Eamon Lonergan agreed that the Carrick-on-Suir to Kilmeaden road was “a notorious blackspot for littering”.
He said €10,000 had been spent by the council last year on works to improve the area.
He said further work was planned for this week, including a full clean-up from Kilmeaden to Fiddown.
“But if it’s anything like last year, within a week or two, the area will be back to the same condition,” he said.
Mr Lonergan said people’s behaviour needed to change and said the council couldn’t keep spending money on the area which could instead be spent on fixing bridges, potholes, drainage etc.
Cllr O’Ryan called for the Comeragh District to send a notice of motion through the council to the Department of Environment in relation to imposing a levy on disposable cups.
He pointed out the success of the plastic bag levy.
Cathaoirleach of the Comeragh District Cllr Liam Brazil (FG) agreed with Cllr O’Ryan’s concerns.
He said coffee cups were found on “every inch of the road” during the recent Comeragh Clean-Up.
“Everywhere you go you will see these coffee cups which are very unsightly,” he said.
“A levy on these cups would be fantastic. Tourists want to see a nice clean place. Waterford is the nicest place in the world to live and work in and we need to showcase it a lot better.”
Cllr Brazil said the Comeragh District had already been very proactive on a number of issues and said he would be delighted to see the District bring a motion to the Department in relation to this issue.
In response, Luke O’Brien said he would make representations on the issue.
“The coffee cup isn’t the problem. It is the person throwing the coffee cup from the car that’s the problem,” he said.
“But it would be advantageous to move to a situation where coffee cups are fully biodegradable,” he added.
It was agreed that a motion in relation to disposable coffee cups would be put to the plenary meeting of Waterford City & County Council.
Meanwhile, Cllr O’Ryan also highlighted the problem of fast food wrappers.
“If we’re going that far with coffee cups, perhaps we could look at the paper bags for chips,” he said.
Cllr O’Ryan said he didn’t want to “give in to people who littler” but highlighted steps which could make such litter less unsightly.
“I’m not saying it’s acceptable but even if these paper bags were green and matched in with the environment they might not be so obtrusive,” he said.