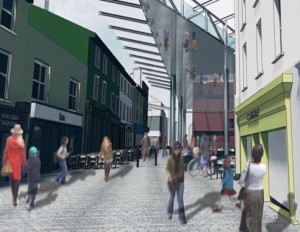 The revamped Apple Market, as envisaged in this City & County Council drawing

An initial investment of €9.5 million is to be made to Waterford’s public realm as part of an overall €17.3 spend which aims to upgrade access to the city centre.

The centrepiece of the plan is the heavily-publicised canopy-style roof which will cover the Apple Market, adapting it for year-round use, thus making the area suitable for year-round public events, festivals and concerts.

“The current phase combined with some of the access routes will be completed in the first half of 2018 to facilitate the development of urban renewal projects in the city centre,” said Mayor Wyse. “The balance of the €17.3m will include works at Miller’s Marsh, the Manor Street loop, the College Street/ Manor Street Junction and the Cork Road.

The project is being funded by the European Regional Development Fund, Waterford City & County Council, the National Transport Authority and other departments and agencies.

“This scheme, by consolidating the public realm works already completed at the Viking Triangle and John Robert’s Square will see Waterford city in the vanguard, providing some of the best quality urban spaces in Ireland,” said Mayor Wyse. “The scheme represents a commitment by the city to high quality and consistent standards.”
He added: “This project is a statement of confidence in our city’s future and will help enable Waterford to fully meet its designation as Gateway to the south east. There will inevitably be some level of disruption during construction however the end results will be a much improved city in terms of appearance and function and will echo what has already been delivered in the Viking Triangle.”
A dedicated Project Manager has also been appointed, “ensuring the minimum impact on the city centre and to help ensure the projects run smoothly and that all stakeholders are kept informed and consulted”.