“Cruelty was the devil’s own trade mark, and if we saw any one who took pleasure in cruelty, we might know who he belonged to, for the devil was a murderer from the beginning, and a tormentor to the end. On the other hand, where we saw people who loved their neighbours, and were kind to man and beast, we might know that was God’s mark, for ‘God is Love’.” – From ‘Black Beauty’ (1877)
A stomach-churning series of images emerged on the Cork Animal Care Society Facebook page last week, and once again offered a sad reminder of how morally bankrupt some people in this country are.
One hopes that the person(s) who condemned a dog to death by setting it on fire don’t have children of their own because if someone is capable of doing that to an animal, one wonders where they tow the moral line by any imaginable measurement.
And if these killers (let’s not mince words here) do indeed have kids, one can only imagine how their boys and girls will fully grasp the difference between right and wrong. As the law defines proper conduct, a right-thinking person is incapable of doing what someone did to a defenceless animal in the Glen on Cork’s northside a few days ago. A right-thinking person would not incinerate a dog. A right-thinking person wouldn’t even contemplate such an act. On Thursday last, the Cork Society for the Prevention of Cruelty to Animals (CSPCA) told the Irish Examiner that the heat generated by the fire would have obliterated all trace of a microchip, thus making the task of successfully identifying the dead dog all the more testing. 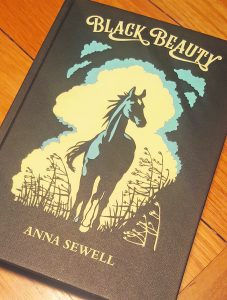 ‘Black Beauty’ might be over 140 years old, but the central message of Anna Sewell’s masterpiece remains sadly relevant in 2019.

Vincent Cashman of the CSPCA offered another appalling detail: “The dog’s front legs were broken. It did not get there on its own.” It’s horrifying enough that the dog was presumably doused in petrol and could well have been alive at the time, but to learn that the poor creature had had its legs broken prior to dying added to the disgust that I and many more felt when learning of this savagery. This is not how we should treat our animals.
Dogs have featured in my life from my earliest memory; in fact, there has been at least one dog in a Keyes household for the past 75 years.
My late Grandad, Jimmy, was a shepherd in Curraghmore Estate and he engendered his love of dogs to my late Father, Johnny. Such affection has not been lost on the next generation, along with the one that’s followed.
Over five different decades, Dad trained dogs, primarily Labradors and Springer Spaniels and proved very successful in field trials and tests across the island, twice competing at international level. Dad was very proud of the Irish blazer he earned when qualifying for the national team which competed at the 1991 CLA Game Fair in Northamptonshire, and we were very proud of our Dad.
Walking dogs, cleaning and washing their kennels and feeding them daily was a staple feature of my childhood. And growing up, a lot of the dogs in our yard became my friends. One in particular, a gentle giant of a ‘lab’ called Huggins (our only house dog), was, for a time, my responsibility, taking in a 200-yard round trip to Sallyhene Cross and back before the primary school bus trundled down Baylough Hill to ferry us to Portlaw each morning. When Huggins died, remarkably in his 18th year, I felt as if I’d lost a brother. Some people who’ve never had a pet in their lives don’t appreciate the bond a child or an adult can develop with a dog. Some even find such a bond to be incredulous. Such people don’t know what they’re missing.
Huggins used to lift his right leg up to both my siblings and I as if he was shaking hands with us. For a dog, who in Labrador terms, bore an otherworldly frame, his gentleness was his most splendid characteristic.
An integral part of my upbringing, Huggins was given an abundance of love and, in his own way, he reciprocated that to us with his friendly, oversized paw. The kindness we were encouraged to show to dogs during our earlier years is now something which, in adulthood, we’re attempting to foster in our own children.
And to see the ‘smallies’ interacting with animals: petting them, bringing them for walks, filling their dishes, etc, represents a series of lessons some eight decades in the making: the muscle memory of two devoted and kind-hearted dog handlers.
The anger I feel towards those who exact cruelty on animals (which I know my Dad and Grandad would feel just as strongly about) is matched by the sadness I feel for the animals who have had such appalling fates meted out to them. And while I elicit some relief from the knowledge that 1,250 animals were seized or surrendered between 2013 and 2017 (according to ISPCA figures), it’s difficult not to dwell on those poor animals that weren’t so lucky, such as that misfortunate dog in Cork city.
Re-reading ‘Black Beauty’ with my child has been a personal revelation on two fronts: given that, incredibly, it was Anna Sewell’s one and only book and, secondly, how struck I was by the power of Sewell’s prose in rebuking animal cruelty. As ‘War Horse’ author Michael Morpurgo states in a foreword to The Folio Society’s edition of Sewell’s masterpiece: “Her book made us think harder about the animals we live with and rely on for so much; it taught us that we should treat animals as we should each other – with kindness, consideration, respect and affection; and that they feel what we feel – pain, loneliness, longing, grieving; that horses also long for love and companionship.”