Home » Local News » Is it Hard to Do What's Right?

Is it Hard to Do What's Right?

The annual salary of Health Service Executive (HSE) boss Tony O’Brien comes to €185,000. No-one doubts just how tough a job fronting our national health service must be, but, by most standards, €185,000 represents a sizeable income. It’s what the Taoiseach gets by on, after all.
Last week’s disclosure concerning Mr O’Brien’s joining the board of San Diego-based Evofem Biosciences back in January, while not breaching any law, came as a surprise to those outside the bubble of the public service’s upper echelon, i.e. most of us.
Yet once again, given the scale of the cervical screening controversy, this subsection within the latest unclipped grenade in health has provided a reminder of the distinction between the legal thing to do and the right thing to do. 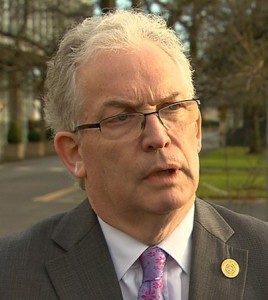 Even if the remarkable Vicky Phelan hadn’t shared her story with the country, even if this latest and scandalous disregard of responsibility for people’s lives and patient welfare hadn’t materialised, no HSE Director General should be serving any other board. End of.
Again, it’s worth pointing out that Tony O’Brien breached no rule in taking up his place on the Evofem Board, and he took the position with the consent of Health Minister Simon Harris. But did a man of Tony O’Brien’s experience not see how this news might resonate with the public?
Perhaps he simply doesn’t care what the public thinks, and that’s somewhat explicable given that someone in his position probably has to develop rhinoceros skin just to get through a single working week.
But what about Minister Harris who is, it’s worth remembering, a journalism graduate: could he have possibly thought his sanctioning Mr O’Brien to take the Evofem gig would be viewed benignly?
Did he privately hope that the HSE boss would keep things between the ditches in the closing months of his contract and that this directorship would pass by without any enquiry? That Tony O’Brien was to work for Evofem on his own time, as the Taoiseach mentioned last Wednesday, misses the bigger point.
The only concern the person in charge of the HSE should have while in charge of the HSE is the HSE, and I would have thought a well paid communications staffer would have pointed that out within Government Buildings over the past week.
That neither Mr Varadkar nor Minister Harris have yet to join the dots in that regard is disappointing, all the more so when it comes to our supposedly media-savvy Taoiseach.
During an exchange at the Oireachtas Health Committee on Wednesday last, Fine Gael TD Kate O’Connell asked Tony O’Brien did he feel he should see out the remaining months of his contract. He replied: “Yes. I have already indicated that I intend to use the rest of my time to focus very specifically on this issue and this is what I intend to do.” In response, Deputy O’Connell stated: “With respect, it’s a pity you didn’t focus on it before now.”
And when Mr O’Brien said the events unleashed since Vicky Phelan’s settlement had come as a “personal blow”, Kate O’Connell spoke for many us when replying: “I would like to make it clear to you today that this not about you.”
The shoulder shrugging ‘don’t look at me’ grandees that have run so many branches of this State for so long have a great deal of work to do when it comes to regaining the trust of the general public.
Surely it’s not too much to hope that people in well-paid posts would do their jobs thoroughly and properly? Nor do I think it’s too much to expect, at the very least, a certain level of competence from those charged with safeguarding the country’s health service. The same goes for those salaried to ensure the security of this Republic.
In my lifetime, public expectations about the performance level and capabilities of the public service’s top rung has probably never been lower.
Be it dual carriageways with poorly positioned flyovers, motorways originally built without service areas being constructed in tandem, the Luas not being fully connected from day one, all the way through to the protracted delivery of the National Children’s Hospital and the ongoing wait for a second Cath Lab at UHW, we remain a spectacularly patient people.
In spite of the governing class’s consistent ability to let us down, most of us get out of bed every day, go to work, raise our children, pay our taxes and get on with our lives.
Yes, there are those who opt not to work, let’s not pretend they don’t exist, but they are not representative of the average daily experience of Irish citizens aged 18 to 65.
We’re not out rioting on the streets, nor are we downing tools and striking with anything like the regularity of the French, despite their 35-hour working week and 11 annual public holidays. Hoping to live in a fairer country is hardly too ideological a platform to occupy. And expecting those fronting our public services to solely focus on their well-paid and heavily pensioned portfolios while we’re paying their salaries isn’t hardly raising the bar too high either.
It appears that a ‘War on Complacency’ may have to be waged before Leo Varadkar’s ‘Republic Of Opportunity’ can be truly considered, let alone realised.