Home » Local News » John McDonald and the pursuit of equality

John McDonald and the pursuit of equality

Having secured the public bus tender for Waterford, Bus Éireann’s commitment to add 17 disability-friendly buses (complete with ramps) across its five city routes represented a positive development for people with disabilities. But, as disability campaigner John McDonald told me, sometimes even welcome news like this requires some fine print reading.
“I’ve not been able to use any public transport in Waterford – or take a taxi – for almost five years,” said John, speaking at the Centre For Independent Living’s office at Waterford Cheshire.
“And that’s all down to the size of my wheelchair. Now I’ve tried to use some of the buses but unfortunately, I cannot get on them because of the narrowness of the hallway of the bus, in addition to the size of my chair, and I realise the size of my chair is a factor in all of this too.”
He added: “But I would hope that people with wheelchairs of a similar size to mine will be taken into consideration when these new buses are being fitted out, and by consulting with individuals and organisations representing all people with disabilities, including wheelchair users, people with mobility difficulties along with those with intellectual disabilities – and all that takes is a quick phone call or a quick meeting which might be of real benefit to both Bus Éireann and those of us who would love to be able to use their services comfortably and without any potential embarrassment. Because if they go out and buy a fleet of buses similar to the last lot they took in, then they’re going to marginalise some of the very people who ought to be able to avail of public transport.” 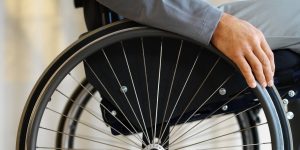 Those of us not reliant on wheelchairs can lose sight of the daily difficulties that users encounter.

People with disabilities – primarily those in wheelchairs – who wish to use an inter-city Bus Éireann service also have to contact the company in advance of a trip in an attempt to see if a suitable bus will be servicing the route on the day in question. So when taking emergencies or rescheduled medical appointments into account, a different set of rules applies for people with disabilities.
“Some people have to give up to a week’s notice if they want to use the national bus service as seats have to be removed from the bus,” said John.
“Now, in this day and age, I really think that’s ridiculous. And on top of that, if there isn’t an appropriate bus stop there, then a person in a wheelchair won’t get into the bus anyway because the ramp doesn’t come down far enough at your standard bus stop – there’s a platform needed – but then not all of those platforms and ramps can take a power chair like the one that I use – you have to be in a manual chair. So somebody who has been using a power chair all of his or her life who wants to go to Dublin or Cork for a day’s shopping, is obliged to use a manual chair and then have to bring somebody with them to push them. Why should they, because a lot of people in power chairs, such as myself, can’t use a manual chair on my own? We should I have to disrupt someone else’s day just to use a bus?”
Given that red tape persists for people with disabilities when it comes to bus access, one would have to wonder what immediate difference Ireland ratifying the UN Convention on the Rights of Persons with Disabilities would make to daily life right now. But, as John McDonald pointed out, ratifying this Convention would represent a significant and necessary forward step.
“It would mean that people with disabilities would be and should be treated as an equal to everybody else in terms of services that are available when it comes to access and transportation, which we’ve already mentioned, as well as in health, education and employment – now there’s supposed to be a three per cent levy on public jobs in terms of people with disabilities – we don’t believe that was ever reached. Funnily enough, Ireland was one of the first countries to bring up the idea of such a convention and much of the convention’s actual wording, but yet we’re one of only a very few countries around the world which has yet to ratify it.”
Fear, John McDonald theorised, is the reason it has yet to be ratified. “I think there’s been a fear about the financial implications of ratifying it, how it might impact on budgets and so on. Now the current government is adamant it’s going to ratify it, which is obviously positive, but legislation has to go through the Dáil and the Seanad, but I’m sure that any reasonable TD or Senator will do the right thing here and put in place the mechanisms and structures which will allow people with disabilities to be treated the same way as everybody else…
“Of course, I welcome what the Government has said about ratifying the convention, but right now, I can only welcome what’s been said cautiously. Until it’s in place, I won’t be popping any champagne corks and I know a lot of disability activists will be thrilled once this is finally in law here because it’s been a long time coming and it would give a whole new level of meaning to everyone in this country with a disability because we would be treated as equal citizens.”
So, let’s hope the UN Convention is ratified this year, that the long-awaited wheelchair bus stop in Dungarvan is finally delivered and that a Disability Liaison Officer will be appointed by the City & County Council. And let’s not forget about providing power chair accessible buses either.