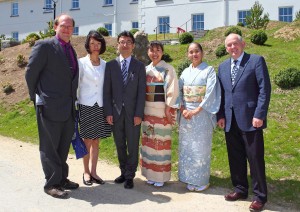 In glorious sunshine on Friday afternoon last, the stunning Lafcadio Hearn Memorial Garden, located off Tramore’s Pond Road, was officially opened, the end product of a €500,000 Irish/Japanese investment.
The 2.5-acre garden commemorates the life of Irish writer Patrick Lafcadio Hearn (1850- 1904), who was known in Japan as Koizumi Yakumo.
Hearn was considered one of the most distinguished and revered westerners to set down roots in Japan in the mid-19th century and spent his summers in Tramore with his Grand Aunt Sarah Brenane.
According to Nina Kennard, Hearn’s first biographer, his love of the sea stemmed from his happy summers spent in Tramore; she wrote that Tramore Bay, visible from the garden proudly bearing his name as “presenting scenes striking and grand enough to stamp themselves forever on a mind such as Lafcadio Hearn’s”.
Funding for this beautiful garden was provided by Waterford City & County Council, along with a €45,000 grant from the Japan World Exposition 1970 Commemorative Fund.
The project received a grant of six million yen (€41,860) in funding from the Japan World Exposition 1970 Commemorative.
The project, which in total will cost €500,000 (with 65 per cent pledged through Waterford County and City Council), the JEC Fund, Japan, the Tramore Community Enterprise Programme and horticultural assistance from Kildalton College, was inspired by the 2012 visit of Mr Hearn’s great-grandson, Professor Koizumi Bon, to Tramore.
Among those in attendance at last Friday’s opening were Professor Koziumi and his wife
Shoko, outgoing Metropolitan Mayor and Tramore native Lola O’Sullivan, Public Expenditure Minister Brendan Howlin and Mr Chihiro Atsumi, Japan’s Ambassador to Ireland, along with other Oireachtas members and local Councillors.
The project was led by Agnes Aylward of the Tramore Development Trust and its completion and opening proved ideal timing ahead of next weekend’s Promenade Festival.
Said, Mayor Lola O’Sullivan said: “This is an important project for the town of Tramore. As a child, just as Lafcadio did, I played on the site of this stunning garden, which will, I am confident, become an attraction of great interest locally, nationally and internationally.
“It will enhance Japan-Ireland cultural relations and will effectively make Tramore Ireland’s bridge to Japan…I am glad and proud that my native town is playing a role in building international linkages with Japan.”
The garden, which took just over a year to complete, includes a range of Japanese features such as distinctively styled bridges, azumayas (gazebos) and porticos and will double up as an educational resource for both WIT and Kildaton College.
Lafcadio Hearn is, according to Ambassador Atsumi, “probably the most well-known Irishman in Japan and I greatly welcome the opportunity that this Memorial Garden will give to many people in Ireland to learn about his connection with Japan.”
The garden features several separate areas, which reveal, in sequence, the story of Hearn/Yakumo from his boyhood in Tramore through to his life and death in Japan and shall prove of great interest to local, Japanese, American and other international visitors.