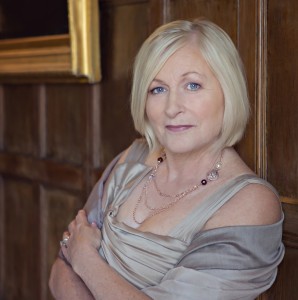 Maria Quilty’s stunning portrait features in the Solas Centre’s 2016 Calendar. “Bara was just fantastic,” said Maria. “Only a good photographer could make me look that good!”

“You have cancer.” Three words, it’s fair to say, a great many of us live in abject fear of. Ferrybank resident Maria Quilty, one of the many happy and willing volunteers (61 in total) who help out at the Solas Centre, shared her personal story last Thursday. And by her own admission, she’s one of the luckier ones.
“No two cancer stories are the same,” she said, as the wind howled outside and the rain bombed earthward, in total contrast to the calm, welcoming surrounds of the Solas Centre where we sat.
“And when I hear the phrase ‘battling cancer’, it just doesn’t sit well with me. We all do our best to live with it, and our utmost to outlive it.”
Maria, chatting with me ahead of her four-hour shift at the Solas Centre’s reception desk, added: “In 2012, I was diagnosed with breast cancer – it was through Breastcheck that the cancer was identified, and I was distraught.
“So I went to the doctor, looking for sleeping pills or some kind of ‘relaxer’, but instead she suggested the Solas Centre to me for reflexology, so a few weeks later, I came here with my friend for that first visit, and at that stage I was still totally devastated by the diagnosis.
“I really didn’t know where I was – and you’d go past this place hundreds of times, think, ‘oh what a beautiful building’ without ever thinking that one day you’d be in there, availing of their services as a cancer patient.”
In August 2012, Maria underwent lumpectomy surgery (“I’d been diagnosed with a very small tumour in the left breast, but it had travelled and was at stage three in the lymph nodes”) and that October, “I started eight sessions of chemotherapy at Whitfield, and that took me into January 2013, and during that time, I’d be out here for reflexology every two weeks.
“And it was great – it relaxed you. If you wanted to have a little cry, if you wanted your emotions to come out, this was the place for it: I’d talk, I’d cry and then I’d relax. And it all helped, believe me.”
Chemo was followed by radium treatment until April 2013, all carried out locally. “To have all my treatment in Waterford, at Whitfield, that was a huge help – I didn’t have to think about long trips to Dublin in Cork, in all sorts of weather. That did take a bit of a weight off.
“But the chemo itself wasn’t nearly as bad as I thought it would be. Sure, I was sick, but it wasn’t head in a bucket stuff for six months. Because when you’re diagnosed, you just have a fear of everything about it – it’s devastating news. But when you actually start it, the fear of it beforehand ended up being far worse than the actual treatment itself. Fair enough, you’d be sick for a few days after it, but before too long you’d feel better.
“And I got on with things as best I could. I’d go into town, go for walks, meet my friends for lunch and even have an odd night out between sessions – because you have to keep going, you’ve got to try and do as much as you can, so long as you feel okay – that was relaxation therapy in its own way!”
The centre itself has come a long way since the days when it operated out of a residential house in the nearby Earls Court estate: and to be sitting in a building borne out of goodwill provided additional food for thought in the aftermath of last Friday’s appalling events in Paris.
“This is a fantastic place, and I had it my head, while I was out here for reflexology, that I’d love to do voluntary work here – I’d worked for 38 years in the ESB – and the day before I was diagnosed, I had signed my VSS paperwork to leave work that December (2012) and then this happened, so I ended up leaving work in July of that year and the rest is history.”
The chemo and radium which followed the lumpectomy effectively rid Maria’s body of her cancer.
“I was lucky; I’d a good diagnosis from day one, and the chemo was all about ensuring there was no little bit of it left at all. And it’s odd, following the radium; I was on a bit of a low, it was finished. The cancer was done with. Work was done with, but I went on a holiday that May with my son, his wife and the grand daughter – the wig was gone, the hair was starting to grow back, and I knew I was on the right road, and going away was a huge help in itself too.
“Losing the hair was traumatic; I do feel it’s harder for women than men, but again that was just an external thing. And life went on, and it’s still going on, thankfully!”
Maria began her volunteer training last July and loves her four hours a week in Williamstown. “I never have the fear of meeting someone who has cancer; people have asked me would it remind me of my own experience and what I went through. But you see, my cancer, all things being equal, is over. It’s done with. What someone else has is different – and everyone is different.”
While everyone is different, our shared humanity and kindness has been brought to bear in bricks and mortar at the Solas Centre: and that’s something all Waterfordians should be very proud of.
If you wish to contact the Solas Centre (Charity No: CHY 15280),
call 051-304604 or visit www.solascentre.ie