As a boxer, Katie Taylor has it all: supreme athleticism, balletic footwork, masterful control of the ring and devastating punching power. A talent which the Bray native feels is God-given, honed since her single digit years, was immortalised by Olympic Gold in London. That glorious day, as was the case when Michael Carruth topped the rostrum in Barcelona 20 years previously, felt like something that even the casual boxing fan on this island could claim part ownership of. For both of those brief, compelling windows in time, clocks stopped across the country. Joe and Josephine Public also threw every punch and raised their defences to dance away from danger between those clanging bells. 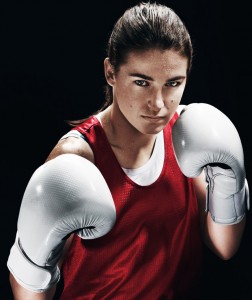 And when the Irish victor’s arm was raised, and the Tricolour flew higher than any other as our national anthem played, we all stood a few inches taller. Memories as golden as the medals both Michael and Katie claimed.
Taylor, whose excellence had persuaded the International Olympic Committee that female boxers deserved their place in the summer games, magnificently earned the prize she dreamt of as an ultra-competitive child.
Claiming that medal may ultimately prove to be the crowning moment of her life, let alone her sporting career, which Ross Whitaker’s compelling film, ‘Katie’, hints at more than once.
Yet however much I admire Katie Taylor’s decades-old drive to scale summit after summit, London 2012, in addition to her garlanded boxing career, shouldn’t prove the ultimate measure of Taylor’s life. But, as Whitaker’s film underlines, never mind suggests, Katie Taylor’s life in its totality appears to be defined by her boxing, a sport in which excellence is pursued primarily through individual, solitary will. An island with a population of one. The film features shots aplenty of Taylor running on her own, scaling Bray Head or striding through the streets and woods of her adopted home in Vernon, Connecticut; in the ring shadow boxing, or taking time out during a session, her brow gelled with sweat.
Perhaps being cut-off from ‘regular’ life is the logical avenue that some great champions feel they must purse – and it’s not like Katie Taylor broke that particular mould: Niki Lauda and Tiger Woods immediately spring to mind. But another sporting great sprang to mind during an excellent Question & Answer session with Ross Whitaker (moderated by Frank Ryan) following a screening of ‘Katie’ at Garter Lane on Tuesday last: Liverpool’s Bill Shankly. In the wake of his surprise resignation as manager in the summer of 1974 at the age of 61, the remainder of Shankly’s life was described by Kevin Keegan as the “saddest, saddest thing” that ever happened within the club in a footballing sense.
Shankly, who was ultimately banned from Liverpool’s training ground at Melwood following his resignation (having initially turned up for pre-season training as if he was, in effect, still manager), was addicted to football. But the club was a big a fix for Shankly as the game itself. He felt deeply let down by those running a football club that he above all others had turned into a winning machine, both domestically and, gradually, in Europe, winning the UEFA Cup in 1973.
From this juncture, Shankly defined himself by his managership of Liverpool as opposed to solely through his love of the game and one cannot help wondering what fix, if any, Katie Taylor will find to replace the Atlantic-wide void she’ll have to face when she hangs up her gloves for the final time. Like any fine work of art, Ross Whitaker’s film doesn’t conclude with absolute resolution: it left me dwelling on what lies ahead for Katie Taylor the human being, rather than Katie Taylor the champion boxer.
“There’s probably between six to nine really incredible fights out there (for Taylor) against other very high quality boxers across a few different weight divisions that are very exciting match-ups,” said Whitaker.
“Over the next couple of years, I think her team want to start pitching for greatness in the sport and to beat some people who have never been beaten before, some people who are big names, maybe not known here but are known in the (United) States and in other countries and I think things are only going to get bigger and better for her. And I hope this film, in a way, gets people onto her story, to start learning a bit more and to start realising that it’s not just about London and the Olympics; that what she’s doing now is very exciting and then, beyond that, you just want her to stop. I feel like she would go on forever…but you’d love her to have two or three more years of success and then for her to find a moment to move onto something else.”
Yet what that something else is remains something which Katie Taylor herself “doesn’t know yet,” according to Whitaker, and that feeling weighed heavily on me in those initial post-screening hours. That she has clearly found a new sense of purpose and well-being in the wake of her 2016 Olympic disappointment, and the seismic loss of her father Pete from her corner that same year, is evidently welcome. Professional boxing, and the embrace of Vernon’s Christian community, has helped the Katie Taylor show to get firmly back on track. And who knows, her greatest nights in the ring might still be ahead of her.
But, like Ross Whitaker, I sincerely hope that Katie Taylor will step away from the game before her dazzling powers fade. Thereafter, I hope she’ll leave that island she’s occupied since childhood behind her so that she can begin to invest in the business we all ought to prioritise: living. That, for me, would represent Katie Taylor’s greatest triumph.