“What is it about stories…they exist because we tell them…”
Ben Quinlan made for home in the dusk of a Wednesday night to warm goodbyes from the young cast Ben Hennessy and he have put through their paces these past six weeks.
The co-director of Little Red Kettle’s (LRK) summer production, ‘Lusmore, Lily, Doire & The Ollpheista’ dropped his skateboard, stepped aboard and wheeled towards Parnell Street, surely pleased with how that evening’s production had fared. And he’s got a great deal to be proud of.
By the interval of this whimsical, three-stranded Celtic adventure, an already buzzed audience was additionally buoyed when news of Thomas Barr’s European Championship medalling broke.
The elation was palpable as punters in the stalls happily spoke about the latest feat achieved by the Ferrybank AC hurdler while also taking stock of the delightful mythological adventure the ‘Little Red Kettlers’ were providing onstage. 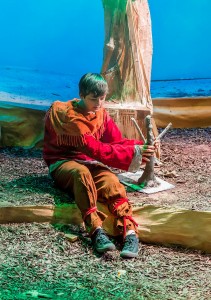 One hushed voice a few rows behind me provided what’s got to be the best compliment anyone treading the boards can ever aspire to receiving.
“They’re acting so well, but I really love the way everyone is reacting,” he said, expressing so much enthusiasm and admiration in so few words.
It was an astute observation. The focus of this young cast was as absolute as their commitment to delivering the best possible performance, and it was a pleasure to watch them grasp lightning and encase it. “You have to be totally committed to it,” said Ben Quinlan, when we spoke at LRK’s final pre-show rehearsal at Saint Paul’s Boys School.
“It’s all in or nothing, really and everyone in there (the rehearsal room) has come together to put on a play and make it their own. What made this play different from the first time it was staged back in 1999 was that Liam (Meagher) and Ben (Hennessy) used to literally write a scene every night, then come in the next morning to rehearse it from scratch – well, we won’t do that anymore!”
Ben continued: “It’s a different production with a different cast so it’s very much its own individual thing in comparison to the first time it was staged 18 years ago, with the cast taking responsibility for how it looks, how it moves and how it sounds once it’s up there on the stage, completely in their own hands. I remember when I started with Red Kettle in 2003 at the age of nine – I’m still here, so that will tell you what kind of a company it is – but the excitement, the joy of being involved in something like this, it was pretty much instant. And that feeling has never gone away.”
Ben’s stream of consciousness merited as little disruption on my behalf as possible, the joy for his craft and this company as palpable as the excitement in the Theatre Royal last week, both on stage and in the audience.
He told me: “I’m blessed. I was just so lucky to land where I am now, living my childhood dream. Because when I was nine I looked up to Ben and Liam, saw what they were doing and how they were doing it and I very quickly knew that that was exactly what I wanted to do, and here I am for the moment anyway and that’s pretty good. And the most important thing I felt then and I hope the cast feels now is the sense of ownership over something with 50 other people your age. The summer of 2003 was a really pivotal moment in my life, and I don’t think it’s too outlandish to suggest that there are hundreds if not thousands of mostly adults at this stage who feel the same way, whether that’s to do with pursuing a life in the arts or making friendships that have stood the test of time since that first coming together thanks to Little Red Kettle. That transition from childhood to adolescence coincided with having the weight of a stage production on all of our shoulders – but none us balked at it. We took ownership of it. We looked for it, and ever since then it fostered this fire in a lot of us to create and to get engaged in that process again and again and that’s really what we’re doing here: we’re cultivating an environment where that seed can take root, grow and blossom into something for the here and now, but into the future as well.”
And part of that growth involves seeing boys and girls between the ages of 9 and 13 broaden their shoulders and project, act and react on a platform they may never have previously realised they were born for.
“That’s an amazing thing to witness,” said Ben. “To see people coming in for an audition when they don’t want to say boo to a gooseberry to bouncing around a rehearsal space having got a part, like happy and talented ego monsters, is just the most brilliant thing to witness over the course of five weeks. I’ve seen the whole process, I’ve been a part of Little Red Kettle for 15 years now, and it’s been life-changing, life-enhancing even. And what can I say: I just love it.”
That joy, love and enthusiasm was made wonderfully manifest in The Royal last week thanks to a stunningly committed group of young thespians, who sent this audience member home giddy, the precious memories of my initial theatre days a quarter century ago reawakened.
* See next week’s ‘Encore’ for Liam Murphy’s review and see News 22 & 23 for photos from last weekend’s production at The Theatre Royal.