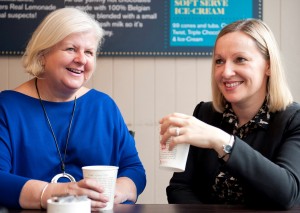 What on earth possessed Mailo Power to run for the Dáil? Two things, said Waterford’s Renua candidate when we met at the Athenaeum House Hotel which she runs with her husband, the equally affable Stan.
“We went through hell and back here,” said Mailo, of the lengthy journey both she and Stan took to keep their business’s doors open, a matter relievingly resolved in July.
“It took us four years to get re-financing through – and it was a very small amount, but the fact that it was a small amount didn’t matter because the banks just weren’t talking to hotels. “In the interim, we did endless presentations to private pension funds and the like, and what shone through in most cases boiled down to this: if you were in Dublin, Cork, Galway – or Kilkenny – more than a few of them told us that they’d have written the cheque there and then but had no interest in Waterford on the basis of what they perceived about Waterford – that it had a militant workforce…
“And we heard that time and time again, particularly in reference to the city. And I’ve got to admit that that got me thinking about the importance of standing up for Waterford’s workforce”
And the second thing? “When a handful of us got together and started Winterval four years ago, we believed that a lot of businesses in the city wouldn’t be in business at all come the following January or February if we didn’t do something to bring people in, so we set about developing the vision of a winter festival, something more readily associated with continental Europe, but a festival that would also incorporate culture, food, the good facilities that we already have in place, and then use that to generate footfall.”
Mailo added: “And every year, we’ve put in an application to Fáilte Ireland for funding for our festival and every year there was a different reason as to why we were turned down. And the last straw came last January when we got turned down again for our festival, the fourth time in a row, so I was going to run as an independent candidate because I was left wondering by then who was standing up for Waterford, who was saying this isn’t good enough?”
Hailing from the Molloy family (“the butchers – we go back generations in Waterford”), Mailo said she could see “just how hard so many people were working in Waterford, be it in business, as volunteers or at local authority level”.
At the end of January, Mailo told a friend that she was “looking for a fair crack of the whip for Ireland’s first city,” also referencing the unfinished WIT conference centre in Carriganore, and that she felt she’d no option but to take an electoral stand.
But Renua was soon to enter the sphere, and partly due to leader Lucinda Creighton’s intention to relax the whip rule within the party, Mailo found a political party where she felt comfortable hanging her hat.
“Adhering to the whip rule is a declaration of surrender – it demonstrates an unwillingness to rock the boat. I feel I’ve reached a stage in life where I am willing to rock the boat; I’m willing to actually say this isn’t good enough, that we need a true voice for Waterford and we need someone standing up for this city and county.
“And it was a friend of mine, whose opinion I value greatly, who said to me, being realistic, how could I hope to affect substantive change as am independent? And it was pointed out to me that Lucinda Creighton was speaking up on a lot of issues I agreed with, particularly the stranglehold that the banks have on so many businesses – and they can say what they like, they are not lending.
“So I emailed Lucinda, she called me back, arranged a meeting with me in Dublin where we spoke, just the two of us, for four hours, about the challenges I could see for Waterford, the challenges I had in terms of running a business while also recognising the fantastic work being done by groups like Winterval, Harvest and Spraoi, and the willingness so many of us have here when it comes to working together.
“Lucinda is a very good listener, she’s a solutions-centred kind of politician, which impressed me enormously, and that’s why I decided to join Renua.”
Admitting it was difficult to establish the party’s identity in its first few months, Mailo Power said the new party’s aim is to “stand up for the people of Ireland, rewarding work and trying to restore trust – it’s as simple as that”.
“People in business are not being rewarded – I know that at first hand – and I can speak from a position of knowledge in this area. Not too many others standing in Waterford will be able to draw from such a first hand level of knowledge and I feel that does represent a considerable advantage on my behalf.”
Mailo added: “My voice won’t be lost within Renua (whose Waterford chair is Milo Corcoran); the voices of those locally ensconced within the machines of the bigger parties are already lost, in my view. And that again, I feel, is to my benefit.”
With her election posters and campaign cards already printed, Mailo Power has risen from the blocks early as a general election campaign looms closer. “I’m doing this the old fashioned way; getting out there and meeting people,” she said.
“We know it may be difficult to make a breakthrough, but we can’t say it’s difficult and not try to bring about change. If we want to see change brought about, then you’ve got to stand up – and that’s what I’m trying to do.”