Portlaw-based FF candidate “on the bus” for Leinster House 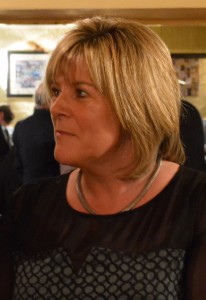 “In the words of my late father, a prouder Fianna Fáil man you would not find, ‘if you’re going on the bus, be on it’ . Well I’m on the bus and I won’t be getting off until I reach my destination.”
Those were the closing, rallying comments of Councillor Mary Butler, when addressing her Kilrossanty audience on Saturday last, as she formally launched her campaign for the 32nd Dáil.
Describing Fianna Fáil’s lack of Oireachtas representation for the past five years as “unacceptable”, Cllr Butler added: “And it’s been equally unacceptable that we are continuously squeezed by strong ministerial representation in neighbouring counties…
“I am grateful to have huge support in the organisation here and working together I believe Fianna Fáil will be in a strong position after the election to deliver on our vision for a country where decent hard working people can thrive, not just simply survive.”
The Portlaw native, her party’s only Dáil candidate, said she is meeting people across the city and county on a daily basis “who are really fed up with broken promises and they’re concerned for the future”.
“Waterford continues to lag behind on job creation, with 10,500 people currently on the Live Register. Employment opportunities for our young people and the state of the health service remains a source of huge anxiety and frustration for people.”
Cllr Butler told supporters: “Next week, nurses working at University Hospital Waterford are likely to take industrial action in response to the Government’s failure to tackle the crisis in health. I won’t criticise them. Who could blame them? They do extraordinary work is very difficult circumstances. “People on the doorsteps have told me there afraid to go to hospital for fear they will die alone in a corridor with people passing up and down. These are the realities.”
Regarding the lack of 24/7 cardiac care provision, Cllr Butler said this amounted to the “Government telling people in Waterford that you can only have a heart attack between 8am and 5.30pm Monday through to Friday – and anything after that and you’re off to Cork in an ambulance .
“Why are we here in Waterford not entitled to the same service that the others cities have. With the recent storms and flooding, road closures and diversions this is simply not good enough, it’s not acceptable and it will have to change. Fianna Fáil is committed to 24/7 cardiac care in Waterford – and Fianna Fáil in government will deliver it.”
Cllr Butler criticised Fine Gael and Labour’s ‘near-exclusive’ focus on the economy – “it’s as if both parties want you to forget their broken promises and bad decisions over the last five years.
“They want you to forget that for three years they were taking medical cards off sick children and people with life-limiting conditions. They want you to forget that at every hands-turn the banks have ruled the roost on mortgage interest rates, on dealing with families in mortgage arrears and on home repossessions. They want you to forget that they ignored rural crime as a major issue and are only now scrambling to tackle it in the midst of the election.
“And they want you to forget that they have presided over the most severe housing emergency ever witnessed in the State where tonight we have up to 10 people sleeping rough in Waterford. This never happened in our watch.”
Criticising Taoiseach Enda Kenny, Cllr Butler described his as a man “on the run – he doesn’t want to face his record – and he certainly doesn’t want to face Micheál Martin in a debate”.
“Because Fine Gael know what we know: Enda Kenny’s leadership has been weak and he has resorted to tales of fantasy to hide his own failings. Side-by-side with Micheál Martin in a debate Enda would be completely exposed.”
Cllr Butler said the economic recovery had taken place “in spite of the Government and thanks to the skills, enterprise and hard work of people here in Waterford and across the country.
“But we need a balanced recovery. And we need strong voices in the Dáil fighting for Waterford. 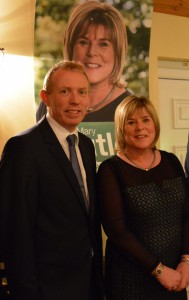 Waterford was always better served with a Fianna Fail TD.”
To applause, Cllr Butler concluded: “That is the reason I am standing in this election. That is the reason I am asking you to support me in this campaign – there are only about seven weeks left to go so there is a lot to do.
Fianna Fáil wants a fairer future for Ireland and a fairer future for Waterford. A future where owning a home, having access to proper healthcare and a secure retirement are not only available for the privileged few. That is a real vision and a fair vision for our country.” And with that, Mary Butler got onto the proverbial bus, which she hopes will carry her all the way into Leinster House.