Home » Local News » Mayor's fears for the "art of conversation"

Mayor's fears for the "art of conversation"

City & County Mayor Pat Nugent (FG) has voiced his concerns for the future of one of our greatest national assets: the gift of the gab.
Speaking at the official opening of the Deise Men’s Shed at the Six Cross Roads Business Park, Mayor Nugent referenced another engagement he’d attended in which he noted how many of those in attendance had heads lowered and necks craned towards their Smartphones. 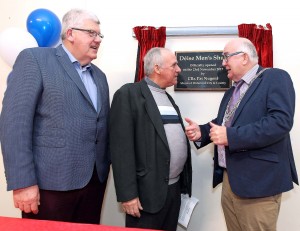 “It made me think about the art of conversation being lost with young people. But I don’t think that this is going to happen here! But it is something which concerns me and I think concerns an awful lot of other people too when it comes to young people and the art of conversation. It feels like we’ve got to the stage that if there was a person sitting in the next room there that some would have to ‘tag’ into their phones in order to say ‘hello’, which is totally and utterly ridiculous.”
Mayor Nugent added: “We were born with a mouth to speak, and I feel the concept of a Men’s Shed is absolutely brilliant, for people to go to, any morning or afternoon that they feel like it, to be productive and feel productive. The concept is so brilliant.”
Mayor Nugent also referred to the Dungarvan’s Men’s Shed, which is currently based in an ETB-owned premises on Wolfe Tone Road, a service which Kieran Foley reported about in our October 24th edition.
“I’ve been involved in some small way with the Men’s Shed in Dungarvan and they are doing fantastic work for the Dungarvan area as well,” he stated.
“But this premises (at the Six Cross Roads) means so much; it gives you such a good feeling to be inside in it, a modern new building and we’ll have to aspire to getting a premises like this in Dungarvan. I’m amazed at the facilities you have here: the workshop, kitchen, relaxation room and crafts workshop. I know you are also working with the local community to give something back to the local schools, who have already benefited from your handiwork. I wish you every success with your venture and happy ‘Shedding’ to you all. Enjoy your woodwork, your metalwork, your arts and crafts, working on computers and repairing anything that comes your way and it’s fantastic that you’re up and running and now a welcome resource for your community, and I hope Waterford City & County Council can support you in any way possible, and as long as I am Mayor, any support we can offer, through the Council, please come to me.”