Derek McGrath, I suspect, was internalising a few emotions in the wake of Sunday’s dramatic injury-time defeat to Clare in what proved a splendid National Hurling League Final replay. One of the emotions that he promptly declared in the wake of what was only his team’s third defeat in seventeen League outings was pride, given what members of his panel had gone through in recent days.
“I was at a funeral in Dublin yesterday (Saturday) and Patrick Curran had to carry the coffin if his uncle into the church, and to be able to go out and put on a performance like that today; Jamie (Barron) similarly, who’ll be burying his grandmother in the morning – and Louis Mulqueen (the Clare selector, whose mother had died 24 hours previously), in fairness, I think it just encapsulates everything that’s right in the GAA. I’m just very proud. I’m not angry, I’m not disappointed. I’m very proud, albeit it’s tough to take as well so there’s a mixture of emotions.”
When asked how he felt when Jamie Barron, clearly fouled, wasn’t awarded a free, followed only seconds later by Tony Kelly’s equalising free, the Deise boss offered a rational, hyperbole-free reply.
“I thought it was a mistake, yeah. I thought it was a mistake. But as I said previously, we make many mistakes on the line ourselves, we make mistakes every day, players make mistakes and any referee is entitled to make a mistake.
“And that is my honest opinion on it. I actually thought the (Kelly) free was wide on top of that, but it probably wasn’t, but I thought it was a mistake on his behalf but that’s the way the game goes.
“Clare just came on a run at the right time. For the majority of the game, I wouldn’t say we were in control because it was a good game, and there were elements of our play which we delighted with,” he said.
“I thought it was a mistake but I will qualify that by saying we made several mistakes on the field and on the line ourselves and I don’t think any referee goes out to make a deliberate mistake…we have to respect Diarmuid’s position and let’s not go hanging a man out to dry here. I think he was doing his best, I thought he contributed towards a good game but I thought it was a mistake alright.” 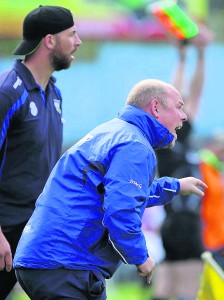 The Deise boss issues instruction, with selector Dan Shanahan in the background.

More disappointing to McGrath was his side’s letting slip a three-point lead with only four minutes remaining, not something one could associate with this young side taking the past two years into account.
“Yeah, if we’d gotten one more point at that stage and, you know, even a rush on our behalf to get on a couple of subs that we may not have needed at the end…I’m caught in the midst of my thought processes now initially after the game. But that’s for another day.”
He added: “I actually thought we played very well after getting off to such a great start with the goal, and we looked capable of opening them up…and I’m very proud of the lads given the negativity that surrounded the game all week, even within Waterford circles, that they were able to shut that out and produce a performance like they did.
“And to me, that’s very heartening for the future, to have stuck to their guns the way they did and show how a counter-attacking system can open up a defence so I’m proud of the way they shut that out all week.”
Patrick’s Curran’s early goal, the Waterford manager felt, “opened up the game…and invariably when a game is being talked up all week as being negative, the game opens up, and that’s what materialised. But fair play to Clare; they came at the absolute right time with some brilliant players and I’m really looking forward to four weeks’ time.”
Derek McGrath was adamant that his team had had no focus other than on the League trophy until full-time on Sunday last. The focus now switches to the Munster Semi-Final clash with Clare, a match of even greater consequence to both teams given the drama they served up over the past two weekends.
“I don’t think we’ve any extra motivation because we were beaten in the circumstances in which we were beaten; I don’t think we’ve extra fuel. But the reality is that the two teams will come on the fifth of June, it’ll be 50/50 from the start and the team that plays better on the day (will win).
“I don’t think today will have no bearing whatsoever on our approach the next day out…we’ve clung to decisions, blaming referees and so on, the reality is a team came at the right time. We’re trying to create a different culture where we’re not playing the blame game. The reality is that Clare won the game because they came up with some important scores at the right time and that’s the reason…
“Clare have some good players all over the field, but I feel we have some good players too and that should make the fifth of June all the more intriguing.” And so say all of us.