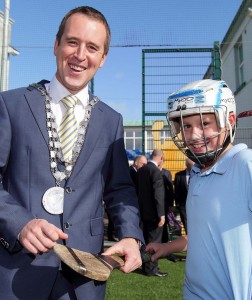 On Thursday last, October 22nd, the new All-Weather pitch at Mount Sion Primary School was officially opened by well-known Gaelic Games writer and Cnoc Síon CLG Life President Phil Fanning, son of the legendary Pádraig Ó Fainín.
This new sports facility, which had been named ‘Clós Phádraig Uí Fhainín’ is dedicated to the memory of the former GAA President (who held the post from 1970 to 1973), is a remarkable achievement for a school based in a city centre location.
Mount Sion Primary School has a long and storied history. Founded by Edmund Rice in 1802 to educate and care for young boys of Waterford City, over two centuries later, the school continues to prosper.
The school’s ethos is focused on giving all pupils an equal chance regardless of their background or their ability to pay. Blessed Edmund’s legacy of caring as well as educating remains a driving force behind the teaching staff of the current incarnation that is Mount Sion Primary School.
The drive to care and provide for all of its pupils led the current Principal Michael Walsh, himself a past pupil of Mount Sion Primary and Secondary schools, to undertake the ambitious project of providing new sports facilities on the Barrack Street campus.
Situated in the city centre, the days of sending young boys walking up to the Mount Sion pitch in Rathfadden and saying “we’ll see you up there lads” is long gone.
After-school activities were always well attended by the pupils with sports such as hurling, soccer and basketball all catered.
However teachers noticed that participation in clubs outside of the school was not what it could have been.
So rather than just talk about it the Board of Management decided back in 2010 to provide an All-Weather pitch on site and thereby enable the boys to play on a surface all year round.
By developing an on-campus site, it’s expected that the pupils’ participation levels in sport will increase and they will join local clubs as they grow in experience of playing sport, especially our national games.
The all-weather pitch will also serve as the Junior Playground in the school and replaces an old tarmac surface which was, to widespread agreement, in need of replacement.
The major impediment for any school in providing the best of facilities is finance. Having been refused funding from the Department of Education, Michael Walsh began the process of seeking finance through the Sports Capital Programme of the Department of Transport Tourism and Sport. Unsuccessful in 2012, the school tried again in 2014 and with support from local politicians funding of €86,000 was secured.
This money was added to by a bequest of the late benefactor, Mr George Jenkins, and donations from past pupils while Mount Sion GAA Club also made a significant contribution towards the cost of the project.
The school doesn’t owe any money following the completion of the project which is a major achievement considering the country has just gone through a very difficult recession.
The new facility, including all-weather surface, fencing and floodlighting was completed during the summer by PST Sports Ltd, having been designed by Falconer’s Architects and Patrick Breen Quantity Surveyor.
The new pitch has been dedicated to one of the school’s most famed past pupils, the late Pádraig Ó Fainín.
Pat was a pupil in Mount Sion from 1925 to 1930, having first attended the Mercy Primary school and went on to become an inspirational leader of men and a major figure in Waterford and national GAA.
The Fanning family, led by Phil, were the guests of honour on the day which saw the unveiling of a plaque commemorating Pat, a welcome tribute for a man and a family with a proud legacy both locally and nationally.
Coinciding with the official opening, the boys at Mount Sion had a fun-filled day, with face painting, singing and activities on the new pitch.
Pupils of the school along with members of Mount Sion’s senior hurling team negotiated a hurling obstacle course.
Current senior stars Iggy O’Reagan, Tony Browne, Mikey Daykin and Martin O’Neill were all seriously tested by the current and upcoming crop of Mount Sion talent.
Principal Michael Walsh is passionate about the quality of education being provided in Mount Sion.
He stated: “There is a dynamic energy about the school where all the stakeholders, parents, teachers, pupils and the Board of Management are striving to be the best they can be. A vibrant expectation of achievement is very tangible and visible in this latest ‘go-ahead’ project in Mount Sion.”
Congratulations to everyone who played their part in delivering this marvellous project for the current generation of schoolgoers at Mount Sion – and for those who will pass through its doors in the many years that lie ahead.