Born on December 27th, 1953 Nicky (Nicholas) Denn has been deeply involved in local football for an incredible 55 years and he freely admits that he is still very much in love with the beautiful game.
Ever since he was a young boy he has been one of the pivotal figures both as a player, a coach and a manager and it would be fair to say that he is one of the most respected and admired figures in the local game.
Literally thousands of players, both past and present owe Nicky a great deal because he has helped a nourished many a player during his decades of service in the game.
The son of Sadie Denn (nee Toms, a family synonymous in football) and Michael Denn, Nicky grew up in the family home at 135 St John’s Park with his three sisters, Vera, Elizabeth and Noeline and he was educated in Scoil Lorcáin before completing his Leaving Certificate in Mount Sion.
When I spoke to him last week, Nicky began by looking back at his working life. “My first job was with a company called Torch and Balance but I knew pretty much straight away that it wasn’t for me and I left after six months. I then went to the Breen Group (of Hotels) as a stock controller and I stayed there for seven years. I then began working with Gerry O’Carroll and we ran a private accountancy company, which was good. My next port of call was the Reddy family at Paddy Browne’s and I worked with them for 17 years and enjoyed it very much indeed. I eventually branched out on my own and to this day I’m still tipping away for different people. I’ve seen a lot of changes down through the years, both good and bad but that is the way life pans out.” 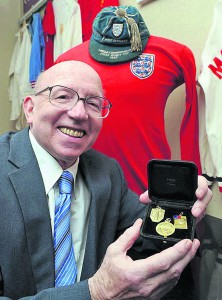 So what about the football? “I was 10 years old when the Villa club returned to schoolboy football and I can remember Johnny Toms, Frank O’Byrne and ‘Faka’ O’Halloran asking me to play for the club. After four years, Ritchie Elliott, who was managing and coaching the Waterford Schoolboy team and he brought me up to that level and I eventually signed for Waterford FC and I can recall training on the gravel in Kilcohan Park with great players like Jimmy McGeough, Johnny Matthews and Alfie Hale. Those sessions were vicious and at times they were like England/Ireland games such was the passion and determination of the players to hold their place on the first team. I eventually became assistant to Alfie Hale when he was the manager of the first team and assistant to Johnny Matthews with the reserve team. I stayed with the Blues from the age of 18 through to 22 and I also played youth football with Southend United for a season – that was allowed at the time.”
Nicky continued: “I can still remember the famous five-a-side tournament that was played in Kilcohan Park in the late 60s. I was on the Waterford team that played a Manchester United team that included Nobby Stiles, Bobby Charlton and Jimmy Rimmer. Their team was managed by Eamon Dunphy and that was a famous and never to be forgotten day. I will never forget the tackle Nobby Stiles put in on me that afternoon.”
Nicky then married Toni (nee Drohan) in 1975 and they reared two children, Andrew and Eleanor. The couple have two grandchildren and “another on the way in January”, as Nicky happily told me.
As a married man at the age of 22, Nicky received a set back football wise as he explained. “I had moved on to play with Bohemians and we won a lot of honours but during my first season I got a bad injury and I was out of action from March until September – but thankfully I recovered and one season we reached the semi-final of the FAI Junior Cup. I stayed with Bohs for six years and when my friend Pat Hennessy who was the manager of Southend United asked me to sign for them. Seamie Coad then came in to manage Southend for two seasons and when he left, I took over as manager job and we won the Premier League in 1986, the last time the club won that title.”
Nicky continued: “At that time, I was really beginning to get a love for schoolboy football as a coach and I got deeply involved with the club at that level. I can remember a really great Under 16 team which included players such as Anthony ‘Fly’ Fitzgerald, the late George Sage, Paul Devereux, Owen Dunphy and Niall Hogan. In 1998 I decided to really devote my time to underage football and along with Yvonne Lyons and Owen Tubbritt; we took our coaching badges in Dublin. I got a call from the Villa in 1999 however because they were struggling to keep their place in 1A and, along with Liam Cooley, we managed to keep them up. I’ve been with the club ever since which I suppose that’s only right and proper because that’s where it all began for me when I was only 10 years old.”
During his career Nicky has also managed the Waterford FAI Inter League team and is currently manager of the Waterford Under-12 Development Squad, a brief which gives him a lot of satisfaction.
“I was delighted to be asked to manage and coach this squad of players because that’s where my heart has always been. I can honestly say this is perhaps the must enjoyable position that I’ve ever held – to coach and work with the wonderful players we have here in Waterford. It’s lovely to be playing an important role in their development as footballers. I try to instil good discipline and proper ethics into them along with giving them the main rudiments of the game. We are playing in the Munster Under-12 competition and we got off to a good start by defeating West Waterford 3-0 – our next game is against South Tipperary in Cahir. Of course a position like this can have its drawbacks.”
He continued: “Having to tell a youngster he isn’t playing for example can be tough or dealing with a parent can be difficult but by in large it’s a super job. To be deeply involved with players as they set out with dreams to succeed in the game is exciting and challenging. Football has changed down through the years and I would like to think I’ve changed too. It hasn’t been for the want of trying!”
Nicky Denn remains as enthusiastic about soccer now as he was back in 1963. His infectious passion and indeed knowledge of the game is a joy to behold and long may he reign!