No News On Second FF Candidate…Yet 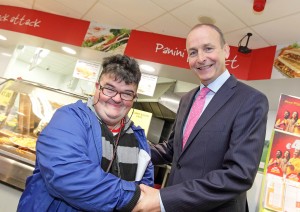 Blame it on the Indian summer, but Micheál Martin enjoyed a warm reception on the streets of Waterford last Friday, as the Fianna Fáil party leader touted his confirmed Waterford candidate Mary Butler ahead of the general election campaign.
Despite the positive mood, Martin remained tight-lipped on the possibility of adding a second Fianna Fail member to the Waterford ticket.
“We’ll assess if another candidate would be beneficial during the national convention in November. We just don’t know what will happen until that process is over,” he explained, before citing the strength of the party’s current runner.
“Mary is proving to be a very effective candidate. We’re very pleased with her across the board.”
Speaking about Waterford’s electoral demographic, the party leader argued that election of Ireland’s youngest politician, Adam Wyse, to Waterford City & County Council should be used as springboard to build a youthful new Fianna Fáil electorate in the region.
“Education is a major sticking point in reaching out to younger voters – third level education grants, especially those for Masters and PhDs, have dried up. The environment is another issue, as is rural broadband and human rights.
“Most importantly, Fianna Fáil needs to ensure that our youth doesn’t feel that there’s a border between rural and urban Ireland.”
The re-opening of talks this September between WIT and IT Carlow to create a south-east technological university provided cause for optimism – a merger that Martin believes would be a relatively simple one to realise.
“We have the right focus for WIT. Concentrating on the idea of a technological university will allow the university to provide technological innovation for the region. It must be accepted that WIT is an international vanguard of technological development.”
The success of such a merger may help address what the party leader labels as “the exploitation of the Waterford people”.
Though pleased by the recent growth in job opportunities across the south-east, Martin stated that the abundance of zero hour contracts in the city must be culled.
“There are two levels of recovery in Ireland. It’s a problem not just facing Waterford, but the entire country outside Dublin. This is something we can’t just rush headlong into. We need to coerce the IDA into discriminating in favour of cities like Waterford.”
The TD was also quick in responding to Dublin’s current housing crises, a problem that has recently reverberated across Waterford city. “This September witnessed the highest housing waiting list of all time in Waterford,” he rued.
“Rent allowance needs to be moved upwards. Private landlords need to be incentivized in generating a bigger rent market. The amount of empty houses across Waterford is absolutely unacceptable.”
But the most pressing issue for Martin on his ‘Deise flyby’ was pressing concerns at University Hospital Waterford, where half of outpatients referred must now expect a 12-month plus wait time.
“Waiting lists have somehow turned from six to 48 months under the leadership of Fine Gael. There has been an 80 per cent increase in this hospital alone,” said the former Health Minister, before providing a somewhat vague plan of action.
“We need to put the hospital on a clear path; its status must be upgraded to serve the needs of the people.”
Wrapping up proceedings, Cllr Mary Butler promised that if elected she would address three key problems across Waterford City and County: health, education and employment. This she argued, “will enable the region to rise in prominence once again”.