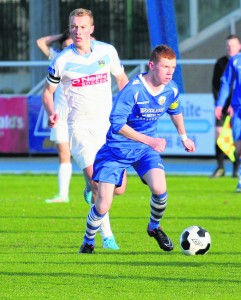 Waterford United striker Mikie Rowe heads for goal against UCD in the Under 19 League at the RSC last Saturday.

FAI Under 19 Elite League
The only unbeaten record in the Under 19 Elite League went down the tubes on Saturday when Waterford United lost against an impressive UCD team at the RSC.
The young Blues team did not play their usual free flowing football and following the 90 minutes the home side could not have any complaints about the final outcome.
They remain top of the table despite this defeat and now must turn their attention to an away game against Mervue United on Sunday next.
Following that game Cork City, who are in second place will visit the RSC. Cork City did not play last weekend as their scheduled match away to Salthill Devon fell foul of the weather.
UCD carved out the first chance of the game on seven minutes when Troy Carey sent over a good cross from the right that met the head of Robert McGee at the back post but his header was just wide of the near post with keeper Matthew Connor beaten.