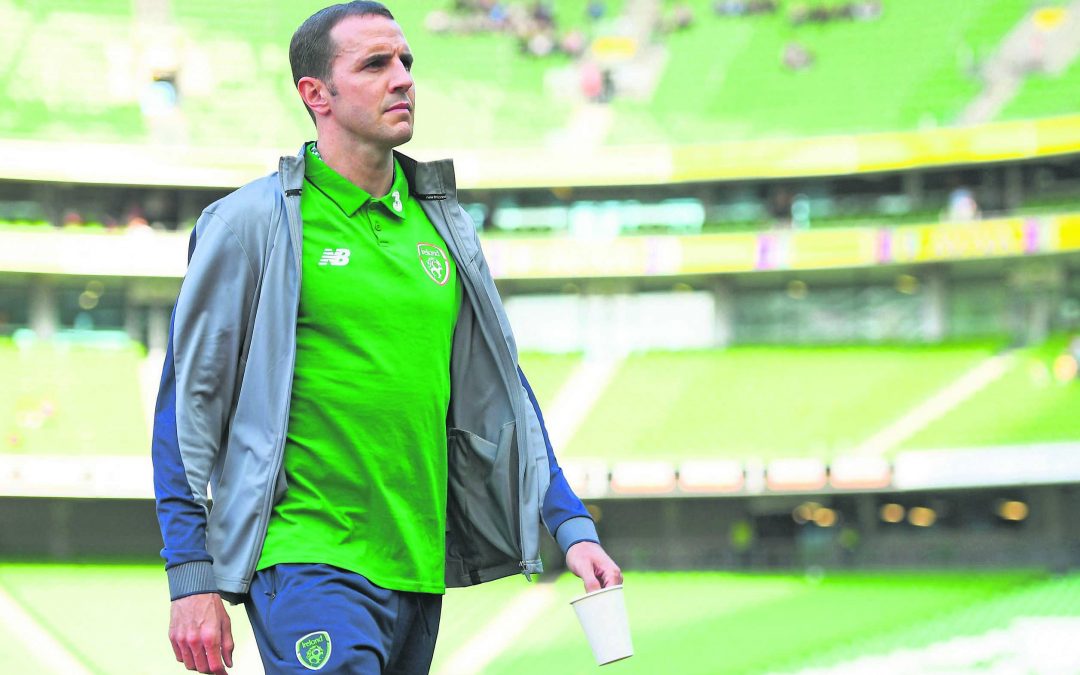 Former Republic of Ireland captain John O’Shea continues to build up momentum in his development as a coach and he is excited by the challenges ahead.
O’Shea was recently announced as Assistant Coach with the Ireland Under-21s and will also be part of the 2020/22 FAI UEFA Pro Licence group, which will run in tandem with his role as First-Team Coach with Reading.
On top of that, the Waterford native is halfway through the UEFA Executive Master for International Players. So he’s got plenty to keep him busy but the 38-year-old wouldn’t have it any other way.
“Once I started hitting my 30s, I was planning for this scenario. I started my UEFA B & A Licence and it was important that I did it with the FAI, to do it back home,” said O’Shea.
“This is a continuation of it now. I’ve been doing the UEFA Masters course and that has given me an insight to the business side of football with blocks on communication, marketing, the framework of competitions, etc. Now, the UEFA Pro Licence will help me get into management and coaching side of things.
“The path that I want to take to get into management is through coaching, as it’s something that I really enjoy. Putting your ideas across to players, watching them train initially, see how they take it on-board, and working with them on it.
“At Reading, I’m working with two very experienced people in Mark Bowen and Eddie Niedzwiecki, while I’ve picked up a lot from various coaches and managers who I worked with during my playing career, both at club level and internationally. So I hope that I can take those experiences and add to them.”
From early in his playing career O’Shea knew that he wanted to eventually pursue coaching and he initially tried it out during his 12 years at Manchester United by helping out in the club’s academy.
A natural-born leader, O’Shea regularly wore the captain’s armband for club and country, yet he still felt those ‘butterflies’ just like any rookie coach would when preparing for his first proper coaching session.
“I remember we were in Dublin for the first block of the UEFA B Licence and we had the players from the FAS-ETB course with us. They were great players to have as a lot of them were involved with League of Ireland teams, but you felt the butterflies in your stomach when starting out,” he recalled.
“In the first few days, everyone was nervous but you could see the confidence grow in the players and also in ourselves in the way that we spoke to the players. When I was asked by Colin O’Brien, who was tutor, to put on that first session – knowing that he will be marking you and giving you feedback – it was definitely daunting.”
O’Shea has learnt a lot since then. One lesson – which came the hard way – was knowing when to get involved as a player as he damaged a calf during a 5-a-side training game that ultimately ruled him out of Vincent Kompany’s Testimonial.
There is also the struggle of finding a work-life balance and that is something that he is very conscious of, particularly with so many roles & courses to juggle over the foreseeable future.
Yet, O’Shea is grateful for the opportunities that have come his way, including the role with the Ireland Under-21s, where he will work alongside Manager Jim Crawford. It will be another key part of his development.
“It came about very quickly. I spoke to a lot of people about Jim (Crawford) and then spoke to Jim. We got on great and it has moved on very quickly since then,” said O’Shea.
“One of the team’s analysts set me up on Hudl so I can watch some of the games, track the players to see how they are doing at their clubs, and look at the younger players who might be able to push up a level. I had seen some of the games already but being able to see everything is great so I can prepare for our games to come.
“There is great work going on with the underage Ireland teams, so hopefully we can continue that on and qualify with the Under-21s for the EUROs. There are some tough games to come but with a new coaching team in place everyone is very excited by it. They are also competitive games from the off, which means the adrenaline will be flowing straight away.
“It will be challenging but getting the chance to work with Jim is fantastic. They are a great group of players, some of them I would recognise as I spoke to Tom Mohan’s Under-19s squad ahead of them going to the EUROs last summer – they had some talented kids in that group. Now I’ll get to work with some of them but, ultimately, it is all about helping Ireland to do well.”
While UEFA have yet to reschedule the Under-21s remaining European Championship qualifiers, O’Shea has already started planning for the Pro Licence course following an introductory call.
“You see some of the people who have graduated from the Pro Licence before and what they have done in their careers so it’s exciting to be part of that,” he said.
“Most of the coaching licences have evolved over the last 10 years, which is great credit to Ruud Dokter, Niall O’Regan and Craig Sexton. They are going to be very important over the next 18 months. We had a video call last week and they said that it will be challenging but also very rewarding, so I’m looking forward to it.”