‘Our hearts are broken but we will be back’ 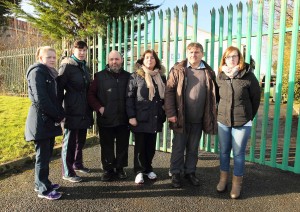 A major clean-up operation is underway at the Ballybeg Youth Resource Centre in Clonard Park, after an early morning arson attack caused tens of thousands of euros worth of damage in the early hours of last Saturday morning.
Twelve computers and laptops, games, arts and crafts materials, beanbags and other furniture, along with table tennis, hurling and soccer equipment and camping are just some of the items destroyed in the blaze, the second fire set at the premises that night.
Emergency services were first alerted to the scene at around 1.30am, after the alarm was activated.
On arrival, flames and smoke were seen coming from the rear window of the premises. Units of Waterford City Fire Service attended the scene and the fire was extinguished. However a second report of a fire at the building was received at around 4am. Extensive damage had been caused by that stage, effectively destroying the building.
The Resource Centre is home to the Ballybeg Youth Project, which runs every Monday to Friday and the Access Project, which operates on weekends.
The projects collectively cater for around 200 young people from the Ballybeg area every year; among its key activities are an after school club offering sports, arts and crafts, music, team building, IT skills, cookery, outdoor pursuits, a summer programme and residential weekends. The project has been in place for almost 20 years while the building is home to four community youth workers, two Community Employment staff, five Youthreach students and up to 20 volunteers.
Community Youth Worker Jen Hannon said the past few days have been an “emotional rollercoaster” for everyone connected with the Centre.
“Our hearts have been broken going through the remains of the fire and seeing how so much could be destroyed – and for what? But it has also been so uplifting the way the community has rallied round, from the Council stepping in and offering us a building to people donating things or giving an hour of their time to help with the clean-up.
“The local community have set up a fundraising group and John Scully in Waterford City Fire Services has been on to say they’ll be organising a fundraising night for us. It’s overwhelming, people are so good.”
Jen Hannon added: “Our main concern now is to salvage anything we can from the building and try to get into the new building as quickly as possible, so that all this upheaval will have as little impact as possible on the kids. We’ve regrouped, we’ve assessed the damage and yes, there is a lot of it. It’s the young people of the community who have been in hurt in all of this but we will be back.”
* The Ballybeg After School Programme will not run this week and the Access Project had not confirmed whether it would run its weekend schedule at time of going to press. Donations to the Ballybeg Youth Resource Centre can be made by contacting Jen or her co-worker Lil Quinn on 086-8589870.