‘Dark Ireland: Images Of A Lost World’ is an apt title for Richard Fitzgerald’s latest photographic tome of Ireland’s near past.
The Kilmeaden-born Fitzgerald first picked up a camera in 1966, and went on to see the world as a ships-photographer before opening a studio in London.
The author’s biography reads: “Throughout his life, he has faithfully continued an enduring love of his homeland,” and this latest work reflects an Ireland that would be alien to most people under the age of 30. But I’ll be honest: I’m glad the pervading social atmosphere of the Ireland Richard Fitzgerald has catalogued in this work has largely disappeared. I’ll explain why anon.
I’m part of a generation (those born in the late 70s and early 80s) who would have heard at the very least, if not personally known, of people living in isolated areas who had no running water. Ergo, no toilet. On an altogether sunnier note, I – and I suspect thousands more – knew of a house on Portlaw’s William Street, where seven bachelor brothers shared their entire lives together. An evening spent in the Morrisseys’ living room was infinitely more memorable than most of my school days, as was another night enjoyed in the undisputed rustic uniqueness of Mickey Kent’s public house in Newtown, near Kilmacthomas. Both regularly staged the works John B Keane never got around to writing, one imagines. The layout of Kent’s truly had to be seen to believed: think Francis Bacon’s relocated London studio, now housed in Dublin’s Hugh Lane Gallery, all 7,000 items of it. An inventory of Kent’s Bar would surely have given Mr Bacon a run for his money given the books, journals, dictionaries and newspapers it housed just as I recall an ornate frame which housed a sizeable, albeit spoiled mirror, against a wall in the pub. Greek and Latin tomes heaped on an armchair, with covers clung to their binding, remain utterly vivid from my one and only visit. 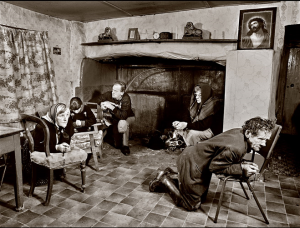 Over 20 years later, that single visit remains an evocative, happy memory, a night when most of my immediate family held court in mid-Waterford. And by God, did we laugh. A tsunami of memory rushed to the forefront of my mind as I leafed through ‘Dark Ireland’. But the faces staring back at me as I ventured from cover to cover perfectly captured the sentiment Richard Fitzgerald conveys in his photography. “As a young boy trying to make sense of my surroundings, Ireland seemed a very dark bewildering place,” he writes. Thanks to previous books of Fitzgerald’s, including ‘Vanishing Ireland’, along with my own childhood experience of sitting and talking with elderly neighbours and relatives, a sense of grimness, hardship and occasional misery were, in hindsight, unavoidable sentiments.
“Yerrah, things were better when I was your age” is the sort of balderdash I hope I’ll be readily corrected upon when the time comes – and I sure hope I’m not there yet!
As someone who never had to walk to school without shoes, for example, I know just how handy I had it in so many ways. I never got a hiding off a teacher. No priest or nun ever put the fear of God into me. And no adult – clerical, medical, sporting or familial, ever robbed me of my childhood. I didn’t have a picture perfect childhood – who does – but as upbringings go, it was benign. And now, more than a few laps into my own adulthood, and given the experiences that others have relayed to my in the course of this job, I am incredibly grateful for that, and the good people who surrounded me and cared for me and made that my reality.
But the darkness Fitzgerald hints at is not exclusively demonstrated by his many shots of people walking, cycling or driving livestock along damp rural roads under foreboding skies. Amongst four large crowd/group shots and across the 97 other faces photographed in this work, only five of those snapped are smiling. Five.
Cognisant that all art is manipulated by the artist, posed photographs are just that – posed. They capture the photographer’s mind’s eye of a frozen moment in a country kitchen or a shed and this of course may not always juxtapose with the day-to-day reality of the photographed subject.
Nonetheless, you see in Fitzgerald’s photographs the creased and weather-beaten faces of rural dwellers, and in the images of those in their kitchens, on their knees, clutching rosary beads for example, there’s not an ounce of joy or contentment in evidence whatsoever.
These images are devoid of optimism. All I see is misery. Repression. The disavowal of spontaneity. And again, it cannot be a coincidence that Richard Fitzgerald cites the words of Patrick Kavanagh as an influence in ‘Dark Ireland’, a man who, at the very least, had a varied relationship with his rural upbringing. Kavanagh once wrote: “Natural life, lived naturally as it is lived in the countryside, has none of that progress which is the base of happiness. Men and women in rural communities can be compared to a spring that rises out of a rock and spreads in irregular ever-widening circles. But the general principle is static.” Static. Sameness. Routine. Rampantly conservative. Some welcome rural traditions remain, none more poignant or soul nourishing than the wake, but I’m relieved that today’s generation can largely only witness Ireland’s past through old photographs such as Richard Fitzgerald’s. ‘Dark Ireland’ certainly doesn’t glamourise misery, but it certainly offers a timely and powerful reminder to the softer generations (including my own) that life is so much better in this country now than once it was.