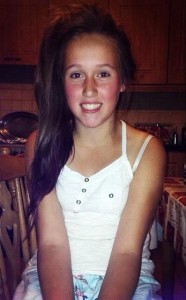 A Waterford schoolgirl has been presented with a National Bravery Award by the President of Ireland, Michael D Higgins.
Róisín Halligan, 12, saved her baby cousin’s life when a petrol bomb was thrown through a window of their grandmother Nellie’s house in Ardmore Park, Ballybeg, in October 2014. She threw herself over 12-month-old Lexie to protect her from the flames and received serious burns to her own face, leg and hand in the blaze.
Little Lexie suffered facial burns but has since completely recovered while three-month-old William Halligan, who was sleeping upstairs, suffered smoke inhalation and was treated at University Hospital Waterford.
Róisín spent six weeks in University Hospital Cork after the attack and had to undergo a number of surgeries and skin grafts to her hands, feet and face.
She was one of a number of children who received a Bronze Medal from President Higgins at the National Bravery Awards last week.
Speaking after the awards ceremony, Róisín’s mother Sabrina described her as ‘our little hero’ and said the family was ‘over the moon’ that her courage had been recognised by the President.