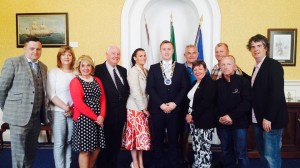 Mayor Eamon Quinlan pictured with the directors and committee of the Tramore Promenade Festival.

New Metropolitan Mayor Eamon Quinlan hosted the directors and committee of Tramore’s Promenade Festival directors and committee in a Mayoral reception on Thursday last to celebrate the success of this year’s event.
Mayor Quinlan (FF) congratulated the entire committee for all their hard work, he more than anybody knows how hard the festival group worked as he has been acting as Chairperson of the Festival for the past year.
Tramore Chamber Director Frank King extended a thank you to Mayor Quinlan on behalf of the people of Tramore and the business community in particular who acknowledged the hard work Eamon had put into the Festival in the past year since he was elected 1st time he has proven to be a most impressive asset to Tramore and Waterford.
Mr King also thanked Cllr Jim Griffin (SF) for his contribution towards the festival and in bringing the emergency services element to the festival.
He asked Mayor Quinlan to also extend a thank you from the people of Tramore to Waterford Council for all the valued support .
The directors and committee start work on 2016’s Promenade Festival and plan on continuing to grow the festival for many years to come.