Halligan feels ‘singled out’ in Confirmation controversy
Minister of State John Halligan has accepted that he didn’t meet the criteria to stand as a Confirmation sponsor for his Godson in Waterford over the weekend.
However, the Independent Alliance TD feels he has been ‘singled out’ for such treatment by the Bishop of Waterford and Lismore, Alphonsus Cullinan.
Minister Halligan claimed that the Catholic Church had resorted to “petty, pitiful tactics” in the closing stages of the Eighth Amendment Referendum campaign.
And it’s emerged that the parents of Minister Halligan’s Godson were only informed of the
decision on Wednesday last, despite the fact that criteria on eligibility for such a role were circulated across the Diocese in March.
In a brief statement, Bishop Cullinan said: “The following was communicated to all parishes: ‘Sponsors should give the [Confirmation] candidate a good example of what it means to be a disciple of Christ and should take their own spiritual life seriously. This will be shown by their [Sponsor’s] love of God, their love for the Word of God, for the Mass and the Sacraments, for the teachings of the Church, and by the love they show for others. A Sponsor must be a confirmed and practising Catholic.” 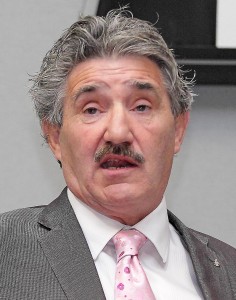 Further questions were put to a spokesperson for the Bishop before we went to print, but no response was issued to this newspaper.
“I was contacted by the parents of my Godson on Thursday to tell me that they had been approached by a member of clergy and told that I could not stand as Sponsor at the ceremony on Sunday and that this was the view of the Bishop,” said Minister Halligan.
“When the parents contacted the Bishop, they were told this is because I am an Atheist and because of my views on abortion.”
In a further statement to The Munster Express on Monday, the Minister added:
“I fully accept that I don’t meet the criteria for a sponsor and would say that the Bishop is free to decide if people don’t meet those criteria. My concern is that I was singled out for not meeting those criteria the day before I was to hold a well-publicised meeting in Waterford featuring some of the biggest names in the Repeal the Eighth movement and just days before the Confirmation Mass was due to take place.