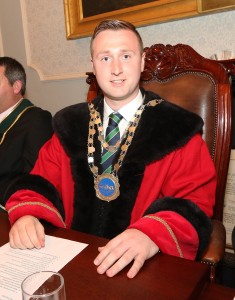 NEWLY elected Mayor of the Waterford Metropolitan District Cllr Eamon Quinlan has said he will oppose any attempt to undermine the role.
Cllr Eamon Quinlan (FF), who represents the Tramore-Waterford City West area, was elected Mayor at the Metropolitan District Council’s AGM at City Hall last Tuesday June 30th .
He was proposed and seconded by party colleagues Cllr Jason Murphy and Cllr Adam Wyse.
Addressing recent speculation that the role of Mayor of the Waterford Metropolitan District may be abolished, he said he would “oppose any attempt to undermine or devalue the office”.
He added that he would fight to retain “core values and institutions”.
Mayor Quinlan, who was first elected to Waterford City & County Council last year, expressed his wish to find “new purposes” for certain areas of the Metropolitan District.
“We must set ourselves the immediate task of assisting the reconstruction efforts of community services in the Ballybeg area,” he said.
Mayor Quinlan said he also hoped for the further development of Tramore and the creation of “new futures” for areas such as Dunmore East and Passage East.
Voting in favour of Cllr Quinlan were: Sinn Fein Councillors Breda Brennan, John Hearne, Pat Fitzgerald, Jim Griffin ; Fine Gael Councillors John Carey, John Cummins, Lola O’Sullivan; and Fianna Fáil Councillors Eddie Mulligan, Jason Murphy and Adam Wyse.
Independent Cllr Blaise Hannigan was proposed and seconded by fellow Independents Cllr Cha O’Neill and Cllr Mary Roche.
Voting in favour of Cllr Hannigan were Independent Cllrs Joe Conway, Cha O’Neill and Mary Roche.
Independent Cllrs Joe Kelly and Sean Reinhardt abstained while Independent Cllr Davy Daniels was absent.
Fianna Fáil Cllr Jason Murphy was elected Deputy Mayor of the Waterford Metropolitan District.
He was proposed and seconded by party colleagues Cllr Eddie Mulligan and Cllr Adam Wyse.
Cllr Murphy previously served as Deputy Mayor of Waterford City & County Council.
Speaking during her final address as Mayor of the Waterford Metropolitan Area, Cllr Lola O’Sullivan outlined some of her many highlights.
She mentioned the opening of the Lafcadio Hearn Gardens in Tramore; the Mayors’ Ball; Waterford City being awarded Purple Flag status; her visits to local primary schools; the opening of the National Lifeguard Training Centre in Tramore; the final voyage of the LE Aoife; the Viking Marathons in 2014 and 2015; major jobs announcements for the area; and many different festivals.
She said she was honoured to have been invited to be part of many different community events.
“The spirit of volunteerism is alive and well in Waterford,” she said.
In particular, she praised the efforts of those involved with the Ballybeg Brick by Brick campaign.
“The Brick by Brick campaign showed the resilience of the people of Waterford,” she said.
In an emotional speech, she thanked all those who had helped her throughout the year especially her family members.
She was praised by her fellow councillors for her work throughout the year.