Reawakened by our natural gems 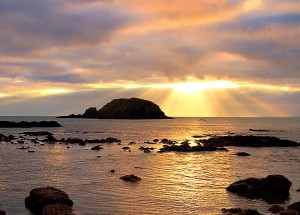 We have an array of natural historic splendours within Waterford, such as Kilfarrasy Beach, near Tramore. We should value them more. | Photo: Noel Browne

A recent Sunday morning in my lodgings. Gravity appears to be pressing my shoulder tips against the pillow ledge a little more heavily than usual.
But as someone who’s never been too accustomed to lying in bed once light filters through a curtain gap – I’m fortunate that early starts have never been that great a burden – I pep myself out of my slumber. It’s time to “attack” another day, as former Manchester United captain Gary Neville once wrote.
Once my first mug of tea has been downed, followed by some toasted sustenance, and with two Irish Times interviews with Bono and Colm Tóibín digested by the time I’m on my second cuppa, I crack open my laptop, unlock my living room windows and let the morning in.
A team of House Martens have returned – ‘tis the season after all – and they’re chirping their way through multiple nest constructions: whistling while they work.
They’re most welcome to set up shop at both gable ends, but I’ll scuff away at their efforts to repeat the trick within proximity of the front door.
And if the past four summers at this address offer any indication, the winged builders will soon ‘surrender’ and redirect their grand, earthy design elsewhere.
If we’re engaged in a long-running, albeit seasonal neighbourhood dispute, the Martens don’t seem overly perturbed by it: after all, they and their predecessors have been flying through these parts a lot longer than I’ve lived here.
They keep coming back, and I’m glad they do, maintaining their life cycle until the temperature drops, the evening light retreats and the warmer African air beckons.
The rain of recent weeks has greened up even this most wondrous of locales, with the frontier hills of South Tipperary and South Kilkenny just north of me and the Comeraghs (visible just a two-minute stroll up the road) splendidly towering to the south.
From my front door, Slievenamon is obscured by a wild row of hawthorn, swaying in the morning breeze like scarf-clad football fans once did on packed terraces. The trees are sweetly blooming as a famous local troubadour, joined by his brothers and one Mr Makem, so often sang to a packed Carnegie Hall. The summer time has come.
The previous night, I’d got in just shy of 11 bells, having taken a road less travelled home. Having enjoyed a visit to Ballysaggart GAA Club for the official opening of their superb new pitch (a regularly unplayable sod at the foot of the Knockmealdowns has been stunningly transformed), I downhilled past the Ice House to my left and Lismore Castle to my right and pulled in at the local service station.
There was still enough light to make a ‘spin’ of things, so I made for The Vee, bidding farewell to the Blackwater, with the promise of the Suir Valley on the other side of the mountain awaiting.
Let me tell you: it was one of the better decisions I have made of late. On the ascent, the only company I had along the road came from sheep who lay claim to these roads in a manner similar to the goats on the approach to Passage East. They came to mind when I watched the House Martens at home the following morning given how accustomed they too have become to their location, their unwitting dominion.
I decelerated, gently moving my car across the road, as one wool-insulated resident appeared in no way inclined to unseat himself from his perch, directly in my path. And why should he? After all, I came and went through his ‘gaffe’ in a diesel-fuelled chariot almost as quickly as an Italian government’s term in office, and he clearly had nothing on for the rest of the night. He soon dissolved in my rear view mirror like a breath vapour on a window, as I drove through a gap which first registered with me back in the halcyon days of the Nissan (Cycling) Classic, a time in my life when my belief in that sport’s purity was as deep in my belief as Santa Claus.
On either side of the Knockmealdowns, the rhododendrons have begun to flower, and a few short weeks from now, it will be impossible to drive along this connection between Waterford and Tipperary and not be slack jawed. To my left, Baylough’s waters appeared utterly static, sunk against the vast wall of ‘rhodies’, which climb rain-forest like over the lake on three sides.
I was in no rush, and I drove in a manner which befitted the mood. I exhaled a hushed ‘wow’ and committed myself to a spin back up here over the next month, in full daylight, with a pair of walking shoes and an appropriately stocked backpack.
The lake, the Connemara-like slopes (everywhere I looked I saw a Paul Henry canvas), the winding roads and catching sight of the Comeraghs from its rear view, as far as us Waterfordians are concerned. What a magical part of the world we live in.
There are those among us who would have thought nothing of jetting to New York for their Christmas shopping a few years back and yet have experienced the vista above Coumshingaun Lake, strolled along Lady Louisa’s Walk by the Blackwater, or marvelled at the splendours of Mount Congreve, Curraghmore and Dromana.
We are truly blessed to be of here, from here and working in these parts. So let’s try and attack every day and stay in love with Waterford – and the lands which flank us – it’s well and truly worth it.