John Deasy confident about delivery of critical projects for Waterford 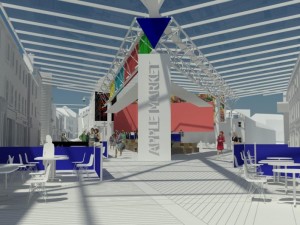 An artist's impression of how the 'glazed over' Apple Market may look post-rejuvenation.

A glimpse of the long-awaited revamp of Waterford city’s Apple Market was revealed in an artist’s impression disclosed to The Munster Express on Friday last.
Included in an upbeat assessment regarding a proposed €21 million Government-sanctioned stimulus package, Fine Gael TD John Deasy said the ambitious proposal was “currently being considered by Government”.
The creation of a rejuvenated ‘public realm’ in the ‘outer’ city centre, encompassing the Apple Market at one end and O’Connell Street is seen as a natural extension of the works initialised in the Viking Triangle.
“The ‘glazed-over’ Apple Market would create a unique pedestrian-friendly realm that would put the area on a pair with any micro-city in Europe,” according to Deputy Deasy.
“It’s also hoped this could also act as a catalyst for the NAMA-led €30 million development of the adjacent Michael Street shopping site.”
It’s projected that the delivery of such a new retail space in the Michael Street area, “freed up by a new orbital traffic system, could activate hundreds of jobs during construction and in permanent retail/food-drink positions”.
In relation to the €21 million package, to which Deputy Deasy disclaimed: “it’s anything but clear right now whether we will get the entire amount”, he added: “but so far the meetings have gone very well and I’m hopeful that a substantial sum will be made available for projects in Waterford.”
The bulk of the package’s funding would come from central government, with Waterford City & County Council (along with possible EU monies) also expected to contribute.
Last month, Deputy Deasy, along with a “senior deputation” from the City & County Council met with Robert Watt, the Secretary General of the Department of Public Expenditure, along with his Derek Moran, his counterpart in the Department of Finance.
There, they presented a case for funding “a limited set of focused investments, which could in turn spur a private capital injection”.
The Deise Greenway is one of several other Waterford projects which is currently being considered for funding, a cycle and walking route which may, in time, connect the city, Dungarvan and Tramore.
On a cautionary note, John Deasy stated: “Court proceedings are currently in train involving some landowners and no-one can really tell what will happen.
“Completing this project depends very much on reaching resolution with the parties concerned, though if these difficulties can be overcome it’s recognised that the Greenway has the potential to generate a very significant extra tourism spend here.”
The package detailed by Deputy Deasy also includes “a targeted intervention in Tramore”, spread between the Market Square/Queen Street axis.
This would also lead to the rejuvenation of the abandoned area around the town’s boating lake, while also creating a public transportation hub at the former railway terminus, which would lead to the restoration of the train station building for community use.
Funding is also being sought to finish the WIT Arena at Carriganore to 2,000-seater, fully-serviced standard “so as to establish it as a regional-scale venue to conferences, expos and entertainment”.
This newspaper understands that the completion of the Arena is currently at tendering stage and a source hopes that work will re-commence onsite this summer.
“These are the type of projects identified in the Economic Strategy prepared ahead of last year’s local government merger,” said Deputy Deasy, who is also seeking an advance factory
for Dungarvan to generate new investment for West Waterford.
“Getting these off the ground would help reinforce the rebranding strategy currently underway in Waterford.”