“Faith has been a cause of great, great comfort, and a great inspiration,” Rose Fitzgerald Kennedy declared in the opening frames of a ‘Radharc’ interview filmed at the Kennedy compound at Hyannis Port in 1973. “It’s the greatest gift God has given me.” This ground-breaking documentary (as so many Radharc productions were) was aired a decade on from the murder of Mrs Kennedy’s son, President John F Kennedy, and five years after the assassination of Senator Robert Kennedy. In 1969, just four days short of the anniversary of JFK’s killing in Dallas, Mrs Kennedy also lost Joseph P Kennedy, her husband of 55 years, at the age of 81. In 1961, aged 73, Mr Kennedy suffered a debilitating stroke, which as the New York Times put it, left him in “an eerie deep freeze sometimes broken by rages, while his sons triumphed, fouled up and died by violence”. 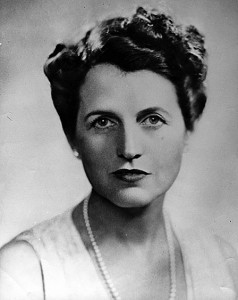 Loss was all too prominent far too early in Rose Kennedy’s maternal life. In August 1944, her eldest son Joseph Jnr, a navy flier and patrol plane commander, was killed during a covert bombing raid of a German rocket site in France. Four years later, her fourth child, Kathleen (‘Kick’) Kennedy (whose own husband William Cavendish, heir to the Duke of Devonshire at Lismore Castle, also killed in action during World War II) was killed in a plane crash in France. Rose Kennedy buried Joe aged 29, and Kick, aged 28, but the losses did not end there. Another daughter, Rosemary (the Kennedys’ third eldest), who died in 2005 aged 86, was subjected to a disastrous frontal lobotomy in November 1941 (then aged 23) at the behest of her father.
As historian Doris Kearns Goodwin put it, “something went terribly wrong” and the procedure’s outcome left Rosemary “much worse”. She lost her ability to both walk and speak and spent the greater part of 57 years at the St Coletta facility in Wisconsin. Her younger brother Ted was just nine when Rosemary was effectively removed from both his and his siblings’ lives.
“Rosemary’s mind is gone completely,” said Mrs Kennedy in the early 1970s. “That was due to an accident, which I don’t really discuss.” In the first three years in which lobotomies were carried out in the United States, 80 per cent of patients were female and 9 per cent of all patients died and over the decades, it’s been widely stated that Rose Kennedy didn’t know that her daughter was subjected to the procedure at the time. Whether Mrs Kennedy knew of the surgery conducted at George Washington University Hospital or not and even taking Joseph Kennedy’s widely documented autocracy into account, history will have, at the very least, a questionable assessment of Rose Kennedy when it comes to her post-surgery treatment of Rosemary.
In a 2015 New York Times review of Kate Clifford Larson’s book, ‘Rosemary: The Hidden Kennedy Daughter’, Meryl Gordon penned the following devastating passage: “Sent to a private psychiatric institution in New York, then to a church-run facility in Wisconsin, Rosemary was abandoned by her parents. Joe appears to have stopped seeing her in 1948 although he was vigorous until 1961, when he suffered a catastrophic stroke. Rose, who blamed her husband for authorizing the lobotomy, couldn’t face her damaged child. ‘There is no record of Rose visiting her eldest daughter for more than 20 years,’ Larson writes. In the early 1960s, when Rose finally did turn up, Rosemary reportedly recoiled.”
When asked about Rosemary in the ‘Radharc’ documentary in the context of parents openly discussing a child’s disability, Rose Kennedy stated: “We did (keep her at home) for a number of years but then it was impossible so now she’s in a very good home with the nuns of St Coletta…I’m very sympathetic to mothers and fathers too because a (disabled) child is constantly on the mind of a mother or father.” Families can be complicated, disharmonious and disruptive, and in the case of the Kennedys, the most scrutinised family in 20th Century America, there is no way that I or anyone from this juncture in geography or history can accurately measure the grief and guilt Rose Kennedy may well have borne for Rosemary in the context of the children she lost.
“If a mother collapses, or if a mother submits to discouragement, then what does a family do?” Rose Kennedy told Radharc’s Peter Lemass at Hyannis Port in 1973.
Of motherhood, Mrs Kennedy said: “Some people find it rather dull but I find it quite challenging and tremendously interesting to think that you have this precious little baby and what you say is going to influence him for the rest of his life, and for time and for eternity and that he is then going to influence other people. And he hears the first words from his mother, it’s she who tells him what’s right and wrong in childish language at first and then of course in firm precepts later and then as they grow older, you share their triumphs at school or on the football field and the baseball field and then afterwards perhaps they go to school, to college and then you take a part in that and that broadens your knowledge and expands your interests but I think that it’s the greatest role a woman can have.” The new Barrow Bridge, which will effectively connect Glenmore and Dunganstown, is to be named in honour of Rose Fitzgerald Kennedy, an Irish-American, a devout Catholic but firstly and foremostly, in her own words, a mother.