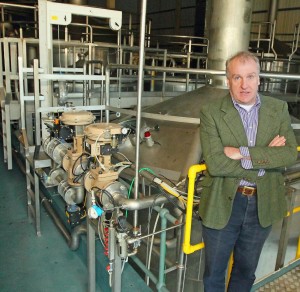 Waterford Distillery proprietor Mark Reynier is thrilled with the progress made a year after acquiring the Guinness Brewery on Grattan Quay.

Full-blown distillation to facilitate the production of whiskey in Waterford will convene in January, with the proprietor of the plant confident that one million litres of pure alcohol will be distilled on site at Grattan Quay during 2016.
Experimental distillation began on Saturday last, October 31st, coinciding with the first anniversary of Renegade Spirits’ acquisition of the former Diageo/Guinness plant.
Speaking to this column in his Waterford Distillery office, Mark Reynier (founder and Managing Director of Renegade Spirits) said he’s been “blown away by the attitude and enthusiasm of Irish barley farmers, the staff we’ve hired here in Waterford and the support we’ve received from the local (City & County) Council”.
So it appears that all the ingredients for success are already in place for Mr Reynier, who hopes to bring his first bottled Waterford product onto the market by 2020.
Central to this is a ‘barley cathedral’ (as Mr Reynier termed it), a warehouse which has been specifically constructed to house the barley being supplied to the Waterford Distillery, with crop being drawn from 46 farms located throughout the south east and midlands.
“Six of these farms are producing organic barley for us – we’ve got the only organic barley that’s been grown in Ireland – and it’s a fantastic product,” he continued.
“The barley is then dried and stored in its own individual bin. In terms of a supply chain, this is unparralled. No-one has ever done this: this is extraordinary. We can prove what we’re saying about the provenance of product that’s going to be produced here in Waterford, and this is terribly important to me.”
Mark Reynier added: “We’re already in a position to itemise barley from an individual field produced by an individual farmer, malted in one particular malting house, which will be distilled here and then stored in one particular barrel. This is detail on an unprecedented level and this is all quite deliberate on our behalf.”
Working in collaboration with malting company Minch Malt, no less than 19 different soil types have been identified among the 46 farms supplying the Waterford Distillery, and these barley varieties shall then be assembled to create his eventual product’s distinctive taste.
“This is all about producing the most profound single malt whiskey ever made – that’s the ambition – and to achieve that you need components, and that’s where the complexity comes from,” he added.
“We’re doing this naturally; there are no additives, no chill filtering, nothing like that. We shall be 100 per cent reliant on the quality of the barley and so by having component barleys that we can keep isolated in our ‘barley cathedral’, from the supplier through to the barrel, by making 46 individual ‘single’ single malts, we can then assemble them together to create a really profound whiskey, the likes of which has never been achieved before.
“So the more component parts of Waterford Whiskey that we can put together, the more complexity we’re creating and the more flavour there’s going to be – this is a landmark concept.”
Mr Reynier said the adoption of the concepts he’s pursuing from his Waterford base is an altogether different experience from the obstacles he had to clear after taking over the Bruichladdich Distillery on the western Scottish Isle of Islay, which was sold to Remy Cointreau back in 2012.
“The buy-in here has been as welcome as the enthusiasm for what we’re aiming to achieve here; the atmosphere to develop a product like is in Waterford just couldn’t be more conducive, and that’s been another huge plus for me.”
The conversion of the €40 million Diageo plant into the Waterford Distillery “has been the straightforward bit – after all, brewing is two thirds of distilling, so we’ve had to move some excess stuff that we don’t actually need and reconfiguring what’s already there”.
And the delivery of two specialist pot stills, which Mr Reynier acquired from the decommissioned Inverleven Distillery in Dumbarton (north of Glasgow) during his Bruichladdich days, proved beneficial for Waterford, some 12 years after he bought both stills.
“It was too good an opportunity to waste at the time; we always thought we’d use them one day. And they’re incredibly well-designed – and the stills had only been in use for 15 years or so when we bought them.
“And it’s one of the reasons we’ve been able to progress so quickly because there’s currently a three-year waiting list for pot stills, which are hand-beaten, and there’s only one company in Scotland producing them. So having them has enabled us to get so far down the line in Waterford so quickly.”
It’s expected that two experimental distillations will be conducted on a daily basis in the Grattan Quay between now and the Christmas break, with Mr Reynier confident that the plant will be operating at full capacity by March of next year.
“This is the best growing barley area in Europe. We’ve got, effectively, a brand new distillery to put to use and some very enthusiastic people associated with this project. All the pieces are in place, and I’m very excited about what lies ahead here in Waterford – and the opportunity to be part of this renaissance in Irish whiskey is tremendously exciting.”
There are currently 14 full-time staff on Grattan Quay, with a further five full-time posts expected to be created in warehousing, and more to follow once the bottled product has to be marketed nationally and internationally.