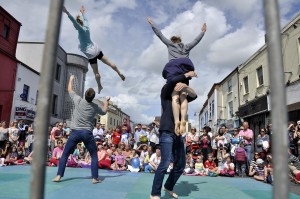 The 24th annual Waterford Spraoi International Street Arts Festival was launched last Friday at the company’s Carrickphierish base.
As per tradition, the festival is set to transform the city into a hive of music, theatre and fun this August Bank Holiday, 31st July to 2nd August. Over 200 shows from a range of local, national and international performers will make this year’s Spraoi more vibrant than ever, according to Spraoi Director TV Honan.
“This year’s programme is packed with street performers from Canada, the Netherlands, France, Spain, Italy, UK, USA, Palestine, Belgium. There’s also a strong Irish programme. Audiences can expect the unexpected around every corner and acts to suit all tastes, from the gentle charm of Mr Moustache (Italy) to the high-octane energy of the Spraoi Parade.
“Spraoi 2105 will feature world-class performers that will captivate spectators of all ages with an array of acrobatic, pyrotechnic, urban circus and comic shows. In terms of music, the Maxol Plaza Stage features a stunning line-up of World music, with two concerts per day on Saturday and Sunday and on-site bar and food facilities. New emerging bands and musicians will showcase in Blackfriars on Sunday and an array of music featuring on The Hop House 13 Rhythm Route in pubs and hotels.Teenage Kicks returns this year, a stage featuring young emerging bands and musicians with original material and this is sponsored by Bausch + Lomb.
“And not forgetting SprOg at Garter Lane, which this year features a special arts and science programme for children.”
Funded by the Arts Council and Waterford Council, along with a host of generous and much-appreciated sponsors, the Spraoi festival has evolved over the years so that it is now at the forefront of supporting new and developing street theatre in Ireland. As a result, Waterford audiences will be treated to a number of world premieres at this year’s festival, Artistic Director Mike Leahy explains.
“One of these is Fanzini Productions’ new show Circus Jukebox. The company were here for a week with us in May for a residency to develop the new show and that will be premiered at Spraoi 2015.
“Also, this is the third year of the NEST (New Emerging Street Talent) stage at Spraoi, where we three young Irish street theatre acts who we have mentored will get to showcase their work. They will premiere those shows at Spraoi and then bring them to the Out There festival in Great Yarmouth and the National Circus Festival in Tralee later in the summer.”
Always the highlight of the weekend, the Sunday night Spraoi Festival Parade annually attracts audiences of 30,000 to the city centre. This year’s show is called The Origin of the Species and Mike is advising people to expect plenty of monkey madness…
“This year is all about monkeys, we’re exploring the place in popular culture of our closest genetic relative so there’ll be puppets, floats and costumes all inspired by the theme and lots of monkey business going on with the performers. We’re about mid-way through the build at the moment and there’s a great buzz about the place.”
Spraoi’s huge cross section of volunteers have always been the life blood of the organisation and this year is no exception, says Mike.
“We’re currently recruiting volunteers for the parade itself and also for the festival weekend. If anyone thinks they can spare some time, they should give us a buzz, we’d be delighted to hear from them.”
• If you’re interested in volunteering at Spraoi 2015, contact 051 841 808.