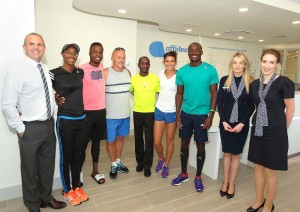 With the World Athletics Championships in London just a couple of weeks away athletes, coaches and their respective physical therapists are fine-tuning their preparations and hoping the athletes turn up at the Championships in the best physical condition.
Inevitably there are injuries to contend with but early diagnosis and treatment for top-class athletes is vital if they are to arrive at the start line with a decent chance of doing their best.
Anthony ‘Star’ Geoghegan, one of Ireland’s top sports physical therapists, paid a visit to Affidea in Waterford last week with some of the world class athletes he’s working with to have them checked out at the new state-of –the-art facility ahead of the World Championships.
Affidea, Ireland’s leading independent diagnostic imaging provider opened a new medical scanning centre in Waterford on July 7th and the building and its ultra-modern facilities were very well received by the travelling athletics contingent.
For Geoghegan immediate access to the facilities is of huge importance with equally fast results a vital part of the process. “What’s fantastic about this facility is that I can ring up and book a scan immediately. More importantly I will have the results the same evening so I can get on to the athletes’ coaches straight away and we can decide then on the best course of action.
Athletes preparing for major championships need instant access to scans and interruptions to their preparations is minimised with the results being available on the same day”.
Nine of the 10 athletes that Geoghegan worked with at the Rio Olympics won medals and he’s hoping for similar success in London.
“Five of the athletes I work with are competing in London and I’m hoping and confident that all five can medal. I’ve also worked with Usain Bolt in the past. He’s calling it a day after London so I’m sure he’ll want to go out with a bag. It should be a fantastic event”.
Coach Gary Evans was also hugely impressed with the facilities. He’s responsible for four athletes in London, Alonso Edwards of Panama (Three time Diamond League winner over 200m), Novlene Mills of Jamaica (400m silver medallist in Rio), Stevie Gardner from the Bahamas (400m) and Tony Mc Quaid (4x400m US relay team). Evans stressed the importance of a facility like Affidea in supporting the athletes.
“This is an absolutely wonderful facility. I wish we had more facilities like this in the United States. Everything is so compact and close at hand. It really is fantastic with the newest and most modern machinery. It’s an athletes dream to have a place like this to come to”.
Grenadian sprinter Bralon Tapin finished seventh in the 400m final at the Rio Olympics but has his sights set on a much higher placing in London.
“I wanted to get a medal in Rio last year and thought I could if everything went right for me. Unfortunately it didn’t happen and I had to be satisfied with seventh place. It’s only a small consolation that I ran in the race where the new world record was set (Wayde Van Niekerk, RSA, 43.03). I’d like to be the one making the headlines and I’m hoping and confident of doing better next month. I have to say I’m hugely impressed with the wonderful facility here.
This is an amazing building and knowing you can get really excellent treatment and results very quickly is hugely importantly to an athlete managing an injury”.
The World Championships in London begin on Saturday, August 5th.