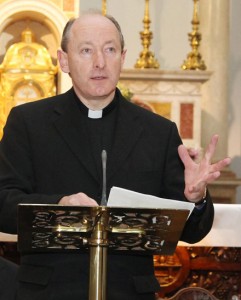 The Diocese of Waterford & Lismore currently has one student in Maynooth and we have two other students starting in seminary in September.
There was a third man who has since changed his mind. These things happen. The place of seminary formation is chosen carefully.
The student in Maynooth is getting on very well and we have no plans to move him. The question of moving him did not even arise. I had a meeting with my two vocations directors in early July when we discussed where best to send our new men who are both mature.
This meeting took place long before all this controversy broke and our motive was to place each man in the seminary best for him, taking into consideration all the relevant factors – age, ability, personal conditions, experience, etc.
In our July meeting we decided that the Beda College in Rome would be the most suitable seminary for our candidates because it is geared specifically for mature men. The Beda Seminary course lasts
four years as opposed to six years in Maynooth.
Our two candidates were among the 18 men who had met at our Vocations Weekend in February and got on well.
They both have experience of living and working outside of Ireland and should have no trouble settling down in Rome.
They also have the great blessing of being able to study in the city of Rome – the city of the Popes and martyrs and which is full of young students for the priesthood and religious life from every corner of the earth. Rome provides a marvellous atmosphere in which to study.
I myself spent six great years in Maynooth and three great years in Rome. I can see the value of giving our seminarians the opportunity to get the best of BOTH worlds – sharing his seminary formation (if possible) between Maynooth and Rome.
Archbishop Eamon Martin has spoken with Archbishop Diarmuid Martin and with the president of St. Patrick’s College, Maynooth, Monsignor Hugh Connolly, and the Archbishops feel it is important the that Trustees of Maynooth meet ahead of the coming year in order to receive a full update on developments since their June meeting and to decide on the Trustees response.
Monsignor Hugh Connolly has also stated that the process of renewal is already underway in Maynooth.
I was in Krakow for the World Youth Day where I saw the vitality of the Church in the two million young people from all over the world.
To witness that vast sea of young people singing, praying, following the Way of the Cross, going to confession and receiving the Lord in the Eucharist was a sight I will not forget and convinces me even more that the Lord is risen, alive and well and the evidence of his presence is there for those who have eyes to see.
I am now organising another Vocations Weekend in November 11th/12, probably in the Pallotine College in Thurles.
I would delighted to meet any young (or not so young) man interested in following Jesus in the priesthood if that should be his calling in life.
Issued on behalf of Bishop Cullinan on Monday, August 8th