STRUGGLING BLUES REACH OUT TO PUBLIC 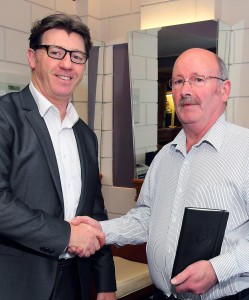 Waterford United requires €80,000 to see out season
Some 150 worried supporters of Waterford United gathered in The Woodlands Hotel on Wednesday last, where they were told that the club requires €80,000 to see our the remainder of the season.
The meeting lasted for just over two hours, with the establishment of a Supporters Trust emerging as a prospect for the tough future that lies ahead for the club.
Waterford United PLC has been ‘parked’ for some time and the club is currently being run by Waterford United Operations. There are historical debts in this area which will need to be addressed in time.
Following the gathering, direct debit forms were handed out and there was a large uptake from those present, with further support provided by Limerick FC supporters at last Saturday’s First Division match at the Markets Field.
An online idea has been in place since the meeting and people are contributing to gofundme.com and at the time of writing there is a steady amount of contributors to this scheme.
Away from the financial area, Derek O’Brien has been appointed Club-League Liaison Officer and it’s a role which will see him work in tandem with the Schoolboy League and Junior League. This appointment was made following comments made by the respective secretaries, Pay Kelly and Martin Flavin.
In addressing the meeting, Blues General Manager Paul Cleary said: “We all remember the glory days of Waterford. I was seven years of age when the cup was brought into the schoolyard after winning it in 1980 but unless we get the support of the business people and the fan base in Waterford, this club is going to struggle going forward.
“We need help. The current management committee is unsustainable in numbers and we need to bring people on board. Of course we need finances as well and it will take €80,000-€90,000 to sustain the club for the rest of the season. Tonight can’t be just deciding about the first team, it has to be about the future.”
The meeting also heard from Limerick FC chairman Pat O’Sullivan who said: “Waterford United no longer has the ‘sugar daddy’ to put in the money week in week out and that John O’Sullivan’s time doing that is now over.
“Limerick FC will open its doors to you all. We will meet you and see how it’s done but you have to be clear that it’s going to cost €250,000 a season to have teams in the League of Ireland. The reason why I am here tonight is that I have huge respect for Waterford FC and Waterford United.”
Stated Junior League Secretary Martin Flavin: “Waterford United haven’t the support of the clubs because of the way they have been treated and that clubs have felt that the club have stabbed in the back….the club needs to win back the support of the football clubs.”
Also speaking on the night, Pat Kelly secretary of the Waterford Schoolboy League said: “It’s important that people realise that there will be a Under-15 league coming on stream and the targeting of players needed to be addressed in the right manner.”
With the attention turning to “historical debt” that the club owe, board member Chris Everett stated: “There is some historical debt there to the Revenue but I’m not sure about personal debt. We also owe the FAI money but there has been a guarantee giving that the club won’t fold over money owed to the Association.
Current Blues U-17 manager Gary Power addressed the meeting on how the club needs to look at the creation of a Supporters’ Trust.
“We need to work to bringing this club into an era where it’s predominantly owned by the fans. We can’t have one man looking after the club anymore and it’s up to the supporters to take it over in the long term We have some great local players and it would be a sad sight to see them moving to other clubs in the region because Waterford United can’t provide football for them.”
Blues Supporters Club Chairman Owen Tubbritt stressed that “the club must have a plan going forward….we have given an undertaking to look after the transport costs for the first team this season and we’re well on target for that. I think that we need to now look at (securing) one thousand donors willing to give €10 a month in order for us to continue going forward.”