'SURVIVE THE RIDE' TO ARRIVE HOME ON SATURDAY, JULY 8TH 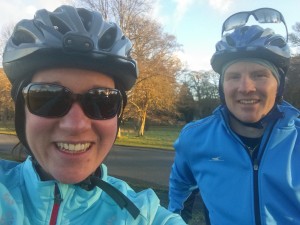 ‘SURVIVE THE RIDE’ TO ARRIVE HOME ON SATURDAY, JULY 8TH
‘Survive the Ride’ is an ambitious but gruelling 640 kilometre charity cycle which is being held over four days which kicked off in the Scottish Highlands, and is due to arrive in Ballygunner, Waterford this Saturday, July 8th.
This event has been set up to raise funds for both the Waterford Hospice and The Roy Castle Lung Cancer Foundation, in memory of Richy Crossland.
It’s been organised by a local Ballygunner girl, Orla Purcell who was Richy’s fiancé. Richy, aged just 32, passed away from lung cancer in 2011 and this cycle also marks the sixth anniversary of his passing. Orla will be joined on the cycle by her boyfriend Andrew Gault and her best friend Lara Gray.
The cycle started Wednesday 5th July in Richy’s home village of Ballachulish in the Scottish Highlands, taking in a 145 kilometre cycle to Glasgow.
Day Two (July 6th) is another 145 kilometre trek, this time from Glasgow to Cairnryan, followed by a ferry to Belfast.
Day three – Friday, July 7th – is the longest single cycle, coming in at 190km between Belfast and Dublin with the final day, Saturday, July 8th taking in a 160km spin from Dublin to Ballygunner.
Six months of intensive training and preparation will hopefully place these three amateur cyclists in good stead for such a lengthy journey.
The cycle is fully funded by the three cyclists so all donations made will go directly to the charities with all money raised being split 50:50.
Donations to this very worthy event can be made online at www.ifundraise.ie/survivetheride or you can contact Orla directly at orla@survivetheride.net
You can follow their progress on www.survivetheride.net or via the usual social media links on Facebook @Survive the Ride, Twitter @survive_theride and Instagram survive_the_ride.
See next week’s edition for the homecoming.
Good luck to all involved from The Munster Express.