Celebrated actor’s grandmother hailed from Mount Sion Avenue
The death of celebrated stage and movie actor Alan Rickman brought to light, for a great many Waterfordians, the revelation of the ‘Harry Potter’, ‘Die Hard’ and ‘Michael Collins’ star’s Deise connection.
Courtesy of a prompt correspondence with Alan Rickman’s second cousin, Waterford native Keith McNulty, the Rickman/Collins lineage was made plain in black and white, tracing Rickman’s roots to both Dungarvan and Waterford city. 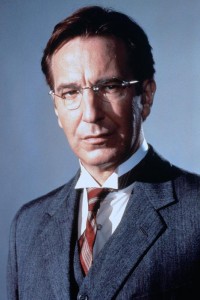 The late Alan Rickman (pictured as Eamon De Valera in 'Michael Collins'), whose grandmother Mary Kate Collins was born in County Waterford and spent her childhood and teenage years in Waterford city.

“The Collins family lived in Monastery Street and Mount Sion Avenue in the late 1800s and early 1900s,” stated Keith in an email.
“Mary Kate Collins was the eldest daughter of the family (and the second eldest of seven children), and was born in Dungarvan in 1887.
“Mary actually had a son named John (whose father is unknown) in and around 1904. But some time after that she met a driver at the Artillery Barracks – now Saint Carthage’s Avenue – and his name was Henry Rickman, and they were married in Saint Anne’s Church, Ballybricken on January 30th, 1909.”
The work of local genealogist Tony Hennessy has also shed further light on the Rickman connection.
“Henry Rickman, known as Harry, was from Fulham in London and was born in (circa) 1884, and was one of 11 children of Edward Rickman, a firewood cutter and later a building contractor, and his wife Emma, who worked as a laundress.”
Tony added: “Young Henry started his working life as a car man but in 1902, when aged 18 (and just 5’2″ high), he joined the Royal Horse Royal Field Artillery and trained as a Shoeing Smith. Evidently he came to be stationed in Waterford Artillery Barracks from early 1904 and while there he met Mary Collins.”
Incidentally, Tony’s research revealed that Mary Collins’s “civil birth record states that she was born on November 21st, 1886 in Brown’s Lane, Waterford City,” while the 1901 Census states that she as born in County Waterford.
“She was baptised in Ballybricken Parish (Trinity Without) just a few days later on November 28th when the family address is given as Grant’s Lane.”
The 1901 Census, printed below, shows that Mary’s father Denis, then aged 70, was a native of Bandon, County Cork and was a British Army pensioner, while her Mooncoin-born mother Mary (nee Quinlan) was aged 45 at the time.
Relationships between stationed soldiers and local women were “not uncommon at the time,” said Keith.
“In fact, Mary’s younger sister Norah (my great grandmother and a witness at Mary and Henry’s wedding in 1909) did the same in 1914, but sadly her husband did not survive the war.
“Due to nationalist tensions at the time, girls that ‘stepped out’ with soldiers were often shamed or embarrassed by others in the town. This could explain why Mary left for London with Henry.”
Henry and Mary’s first child, also called Henry, was born in Waterford late in 1909 and shortly after that, the Rickmans (including Mary’s son, John) moved to Fulham in London.
Mary and Henry had two more sons before World War I broke out, the youngest of which was Bernard Rickman – Alan’s father – who was born in 1914. Bernard would die of cancer in 1954 when Alan Rickman was aged eight.
Tony Hennessy added: ” Henry Senior remained in the British Army and was among the first British ‘boots on the ground’ in France following the outbreak of World War I. Thankfully. he survived the war, receiving a Meritorious Service Medal along the way. He retired in 1920 after 18 years service and died in Fulham in 1937 and three years later, in 1940, Mary Collins died.”
Alan Rickman was born on February 21st, 1946 in South Hammersmith, London, the second of Bernard Rickman and Margaret Bartlett’s four children. Margaret, a Methodist, hailed from Pontypridd in Wales.
Keith McNulty stated: “Unfortunately, I never met Alan, but Tony Hennessy’s nephew Rubin went to see him in a play at the Abbey Theatre in 2010 (Ibsen’s John Gabriel Borkman) and met him afterwards.
“He asked Rubin where he was from – Rubin said Waterford – and Alan replied that that was where his grandmother was from, so he was very much aware of his ancestry.”
Tony added: ” It would have been nice to meet Alan Rickman and to show him around those parts of Waterford City that are entwined with his own family’s history.
“And given that his grandmother Mary Collins was one of seven children there would have been every possibility that he might bump into living relatives along the way. May he rest in peace.”
Alan Rickman, who is survived by his wife Rima Horten, died on Thursday, January 14th. He was 69 years of age.