The Pitfalls of Strategic Communication

“Communication across government is an absolute prerequisite for effective implementation of policy initiatives. Communication to our citizens is an essential public service: the public has a right to know what their government is doing on their behalf, and why. That is why this new unit is being set up within civil service structures.” – An Taoiseach Leo Varadkar, September 6th 2017

The creation of a Strategic Communications Unit (SCU) by Leo Varadkar raised many an eyebrow in the wake of his succeeding Enda Kenny.
What on earth would this well-financed operation (with 15 civil servants overseeing an annual budget of €5 million) get up to, the political media queried?
Why did we need such a unit and what duties would it execute which previous Government Press Offices – or the existing press offices across all Government Departments for that matter – hadn’t already dealt with?
Well, the first widely recognised manifestation of the SCU’s activity came to pass last week in relation to the ‘Project Ireland 2040’ advertorial spreads which featured in many regional and national newspapers over the past fortnight, including this one.
Given that this was a paid feature – which helps businesses such as ours to keep buttering parsnips – both pages were marked as Advertorials.
Not every newspaper which received this same spread marked it accordingly, but surely when copy is commercially generated, the distinction between such copy and original in-house work must always be made.
That’s a fundamental as far as I’m concerned, and a facet of our work which has to be sustained if we’re to retain the trust of readers, particularly in an era when every single sale matters.
As Southern Star Editor Con Downing told The Irish Times, he, as I did, felt it necessary to indicate that last week’s two-page spread was not News, per se.
“There is a bigger principle at play about native content,” he said. “It’s beginning to creep into publications and I would not be in favour of it. I wanted to make that clear.”
I’m not going to have anyone on social media or among the Opposition suggesting that this publication, the only one I can speak for, was ‘bought off’ by the Government. We received an Advertorial and presented it as such to readers. End of. 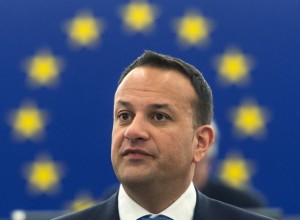 Last week wasn’t the greatest from a communications perspective for Taoiseach Leo Varadkar.

It’s worth stating that the only public political dressing down this columnist has ever received came via former Fine Gael Councillor Tom Cunningham in City Hall in the wake of a column I wrote condemning the FG-sanctioned merger of our City and County Councils.
Such a filleting sent my stomach churning at the time: now, with the benefit of age, I feel rather proud of the fact that I ground Tom’s gears to that extent!
I also penned another column titled ‘We Are Being Governed By Sheep’ during the lifetime of the previous government so if I’ve been involved in any State collusion, I’ve evidently not hidden my tracks well enough.
Given the mixed signals on domestic heating uttered by the Taoiseach and Minister Jim Daly on Tuesday last, which left Jim Daly carrying a more prime ministerial tone than the office holder himself, in addition to the ‘Project Ireland 2040’ kerfuffle, the Government’s message took a rapid steer off-course.
It makes one wonder how polished we want our politicians to be. Consider the deference a considerable cohort of the population retains for former US President Bill Clinton, unquestionably one of the finest orators of his generation.
And such is his power of verbiage that one can almost semi-detach Clinton the leader from the morally dubious Clinton. Donald Trump would appear to be cut from the same questionable moral cloth as ‘POTUS 42’ but because he cannot deliver a speech without sounding like he’s struggling through an entrance exam, a great many of us cannot take him seriously at all. You see, words do matter.
And the great irony of modern Fine Gael is how utterly charming, well-read and informative a tone Enda Kenny consistently struck in an informal manner, in contrast to his “I met a man with two pints” shtick from the floor of the Dáil.
It’s an oddity that the real Enda Kenny appeared to surface only intermittently during his time as Taoiseach, given the many headlines we read about party handlers shielding Mr Kenny from the media while he held this country’s highest office.
While his public persona is being carefully manicured via his own social media input (his choice of socks, his ability to stack a dishwasher and his penchant for jogging, etc) the question of who the real Leo Varadkar is has not yet been substantially answered.
Perhaps Sarah McInerney’s biography of the Taoiseach may shed some light on this in due course, but Leo’s relatability to the non-Fine Gael voter needs a lot of work.
And I have to question if it’s within the gift of the 15-strong SCU to make Leo Varadkar more appealing in a wider sense given that almost 3,300 more party members wanted Simon Coveney to succeed Mr Kenny last June.
Whether such SCU-sanctioned advertorial features will be floated to the national and regional print media in due course will surely come into question, and kudos to Dungarvan-born reporter Ellen Coyne, who covered this story so thoroughly in the Irish edition of The Times.
As a business, we’d welcome further campaigns, and I make no apologies for that, but one would hope that such spreads, if and when offered to newspapers again, would be clearly demarked as Advertorials by each and every title who secures such custom.
Either way, we’ll keep doing what we can to afflict the comfortable and comfort the afflicted. How that’s for strategic communication?