Home » Local News » The 'Right To Die' debate must be had

The 'Right To Die' debate must be had

The helplessness has to be the worst thing. Sitting by a loved one’s bed, day in, day out, knowing that the person you’re caring for is terminally ill.
Knowing that you can’t really do anything for them, other than being there. It’s terribly inadequate – nothing in comparison to what the ill person is enduring – but it’s disempowerment at its most demonstrative.
What purpose is there in life if there is no quality whatsoever in the life of an gravely ill person?
And shouldn’t the voices of those – all the more pertinent until many are robbed of that very faculty – who feel they should have a say in how their life ought to end – be heard? 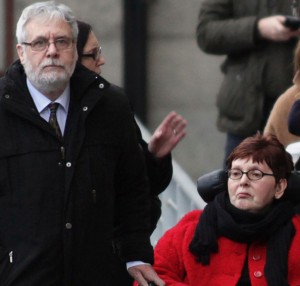 Dignity: the late Marie Fleming and her partner Tom Curran.

In an age where our news pages, online columns and on-air bulletins are justly carrying an increasing focus on our most vulnerable, don’t those who have to endure this suffering – in some instances for years – merit every inch, paragraph and broadcast we can afford them?
There probably aren’t a huge amount of votes in this for any politician who raises this sensitive matter, and I am proud that a Waterford TD has carried a torch on this issue, and will continue to do so.
This is most certainly not an issue that can be tagged as populist, and I for one am glad that John Halligan has had the political mettle and moral fortitude to not shirk from raising this issue.
Introducing the first stage of the Dying With Dignity Bill in the Dáil on December 15th last, Deputy Halligan said he felt it was time to recognise “the right of clearly consenting adults who are enduring intolerable physical suffering to seek medical help to end their lives”.
The Independent TD was inspired to address this issue given the “brave battle” waged by Marie Fleming (59), who “passed away peacefully” in December 2013 according to her partner, Tom Curran.
Prior to her death, Ms Fleming had unsuccessfully taken her ‘Right To Die’ case to the Supreme Court “on the basis of not allowing her to make decisions in relation to her own death”, Mr Curran told a Waterford audience last March.
Marie made Tom aware of her Multiple Sclerosis (MS) shortly after they first met. “In other words, she gave me an opportunity to walk,” Tom Curran told the Irish Hospice Foundation’s Dementia Conference.
“I didn’t, and she kept nagging at me for not making that decision, particularly when things got very difficult…I can honestly say it was the most rewarding thing that I ever did. When Marie progressively got worse, it was an honour to look after her…
“To replace the things that she couldn’t do, to feed her, to hoist her in and out of her wheelchair and her bed, to look after her, it really became an honour. I’m so glad to have had the opportunity and to have shared my life with such a wonderful person.”
Marie Fleming’s wish to take control of the end of her life was something she and Tom Fleming had lengthily discussed.
“We planned ahead, way ahead and we made sure we made the best of every minute we had before she died.” Her grandchildren were even brought into the discussion.
“But it worries me that other people, and particularly people with illnesses that are going to kill them at some stage, are so reluctant to talk about the future – in any way.”
John Halligan’s bill, which he will continue to discuss in the Dáil once the government negotiations are hopefully and successfully concluded, noted the content of the Chief Justice’s comments in the wake of the Fleming case.
“In the case at that time there was nothing in the judgment to prevent the State from introducing legislative measures with appropriate safeguards to deal with such cases as hers,” he said.
The Bill, in John Halligan’s view, sets out “strictly monitored criteria to allow a person in abnormal suffering to choose a dignified pain-free death surrounded by loved ones, rather than to continue to endure their excruciating torture with no quality of life, often completely incapacitated and in an unconscious state and then to die an horrendous death. We are talking about people who in their most desperate moment of life are being deprived of their humanitarian rights.”
As we have highlighted in recent months, Irish people are living longer, with, as John Halligan notes: “the result that the rate of chronic illness is on the rise.” We are living longer, ergo, many are, sadly, suffering longer. John Halligan has personal knowledge of such suffering given the “terrible existence” his father endured following a stroke.
“He was incontinent and he could not swallow. Solid food had to be liquidised and liquids had to be solidified yet he fought to live.
“People who fight to live and want to survive should be given the opportunity and all the help they require but a small percentage of people are unable to bear the suffering and they also should be allowed to have a dignified death.”
Marie Fleming endured enormous suffering. Lismore native Kate Tobin, whose story we relayed last week, is losing her balance and strength on a near daily basis, as her body succumbs to the ravages of MS. In time, she will be incapable of independently swallowing food. In time she will lose her voice. In time, MS will overwhelm her.
Walk in Kate Tobin’s shoes, or those of Tom Curran’s for that matter. Should anyone, with no hope of recovery, be allowed to suffer unnecessarily? Just imagine that person is your mother, your father or the person you’ve committed your life to? Just imagine having THAT conversation. John Halligan’s Bill must be widely discussed. And we must willingly listen.