The struggle for fairness

On Wednesday last, I visited the Dialysis Unit at University Hospital Waterford (UHW), where 18 patients had just begun their latest four-hour stint of treatment. Most of the 120 patients attending the unit do so three times weekly, spending a total of 12 hours on a bed, connected to a blood cleansing machine. The staff who greeted me exuded warmth and the level of cordiality between patients and nurses was palpable. The initial dread of attending the unit, as Portlaw native Jack Kelly described it to me, rapidly dissipated within the space of his first visit. And I could soon see why.
“We get to know our patients very well,” said Brenda Ronan, the unit’s Clinical Nurse Manager. “It’s not just a patient coming into us for dialysis. We get to know them over several years and we also get to know their families. There’s a real sense of community here and all of us, staff and patients alike, get something out of that, and that’s wonderful.” For me, there’s a different atmosphere within an outpatient area of a hospital. However testing it must be to lie largely still for four hours, virtually all dialysis patients have the comfort of home to look forward to that evening, something that may be out of reach for a patient in Medical 5, for example.
Dialysis patients are afforded top class care in their regional hospital and that’s just how it should be. If only this applied across all specialities at UHW. My God, if only.
On my way into the unit, a small plaque hanging in the reception area caught my eye, and at first I didn’t fully grasp its significance. But I sure did on my way out, given what Brenda told while we chatted in the adjoining Tea Room. “The original unit here came from the ground up,” she said. “It was built thanks to the goodwill of people in the region who wanted a dialysis unit based in Waterford, serving patients in the South East. At the time, contributions from businesses in Waterford were gathered by the various trade unions and that led to what was first put in place here. Before this service was delivered locally, patients from Waterford and across the region had to make the trip to Dublin for dialysis, and for many of them that meant being in Dublin for treatment at 6am.”
On my way out of the unit, I paused to take in the text of the small plaque I’d only glanced at earlier. It reads:
“The original Dialysis Unit built and equipped by the people of Waterford and the South East in conjunction with the Waterford Council of Trade Unions. May 1983.” 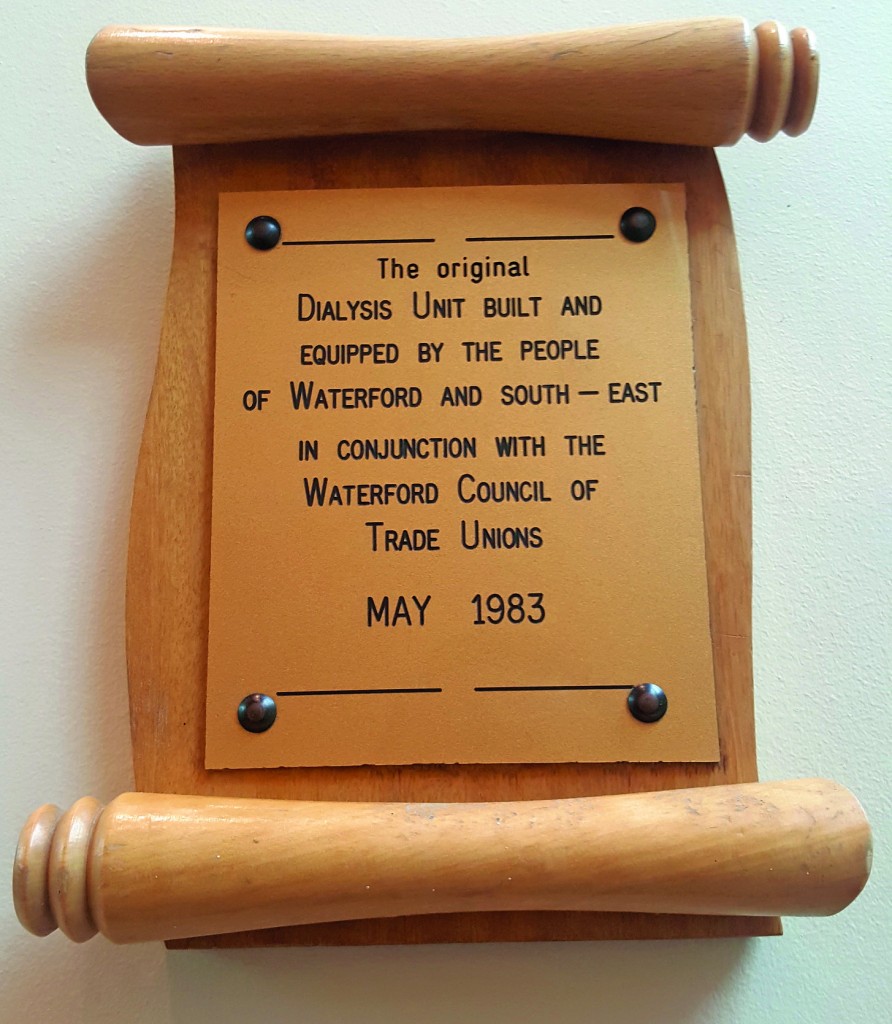 The small but significant plaque hanging in the reception area of the Dialysis Unit at UHW. The people of this region are accustomed to rowing uphill when it comes to health service provision.

Having been a month shy of my fourth birthday at the time of the unit’s opening, and coming from a family which has never experienced any serious/chronic kidney problems, the story of what it took to initially secure Waterford’s dialysis unit was news to me. Not knowing this prior to Wednesday last left me feeling more than a little embarrassed, I must admit. Nephrology, Radiotherapy and Cardiology: why is it that people living in this part of the country do not appear to count as much as someone living in Dublin, Cork, Limerick or Galway?
Why is it that it took people power and the sustained goodwill of the public to deliver fairness for patients in Waterford and the South East when it came to introducing dialysis and radiotherapy services?
And why is it that the people of this region have had to take to the streets again and again to point out that we do count when it comes to cardiology? That we do matter. That we too make our contribution to the State to fund all public services, including health, that we deserve what other regions have. That we deserve a suitably equipped and staffed cardiac service open all day, every day. No excessive demand has been sought by anyone who has held a placard, signed a petition, issued a press release or lobbied a politician. Several cardiologists, whose expertise is matched by few, if any Department of Health or HSE wonks, have spoken out about the blatant injustice that’s been at play here for years and in doing so have done all of us a service. But the chances are we’ll not be seeing any of their names on plaques in this city any time soon.
“We’ve gotten nowhere with this Government about an issue which is medically inarguable,” retired Consultant Ophthalmologist Dr Paddy Condon told me last August. “We’ve been grossly disserved by successive Ministers, including the current incumbent who, in my view, is a spoofer. This Government is failing miserably when it comes to housing and things are no better when it comes to health. And it doesn’t look like we’re going to get out of this loop anytime soon. It really is appalling.”
The €4.75 million approved by the HSE for the second Cath Lab and Day Ward have been safeguarded – at least that’s what we’ve been told in the past week. But that still doesn’t get UHW to where it ought to be when it comes to 24/7 cardiac care. That a march in Dublin on March 9th is even considered necessary at this stage to further highlight this appalling regional disparity is, in itself, roundly depressing. The world beyond the M50 is a space that Leo Varadkar really ought to get to know better. “So long as I am Taoiseach, Waterford will not be neglected or forgotten,” Mr Varadkar said when speaking at Bausch + Lomb in July 2017. When it comes to UHW, we in Waterford await the evidence of such a contention, Taoiseach.