Fin Whales
A friend of mine was traveling into Tramore from Bunmahon along the winding and scenic costal road. The weather was bad and with plenty of time he was in no hurry. As the sea came back into view he noticed a pod of fin whales swimming along the shore line. Later on I listened enviously as he recounted his amazing wildlife experience to me and my landlocked environment.
Encounters with these majestic marine creatures leave a lasting impression. I have a vague memory of watching the news one evening when I was very young and seeing the excitement in the room as a report of a beached whale was broadcast. The following day we were packed into the car for a trip to the beach but I remember we didn’t pack our buckets and shovels. A few tantrums later we arrived at the sea and I remember holding my Mum’s hand tighter as we approached a large crowd that was surrounding the largest creature I have ever seen. A ripple of excitement and fear ran through me but the tragedy of the event did not surface till many years later. It smelt slightly and the skin had a cold and salty texture and the story of whales that swallow ships were very real to me on that day.
Fin whales are the second largest animals in the world (only the blue whale is bigger) and when fully grown can measure over 90 feet in length and up to 130 tonnes. Females are around 10% larger than males and spare a though for her as a new born calf can be 20 feet and a hefty 4,000lbs. Life expectancy is the same as people, averaging 90 years and they take 30 years to reach full physical maturity. They are brownish grey and whitish underneath. Their bodies are slender and streamlined and can reach speeds of up to 25km per hour. A small pointed dorsal fin gives then their alternate name of Razorbacks. They can dive for up to 15 minutes but need to come to surface to breathe. Their dramatic blow, evocative of so many films about whale hunting, can reach up to six meters into the air. 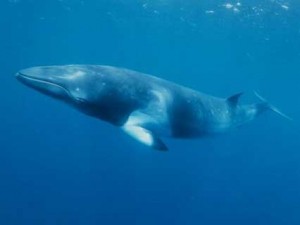 They are found in most oceans and are absent only where a permanent covering of ice stops them for surfacing. They can be solitary animals or found in small pods of 8-30 animals. From Slea Headland in Kerry to Hook Head in Wexford is a good place to see them with peak times during December and January.
Diet consists of smaller crustaceans (like crabs), squid and fish. They catch their prey by opening their mouths as they approach and this technique is called filter feeding. The water is expelled from the mouth and the fish are then swallowed. Often they will work together to herd their prey into a tightly packed ball as this collective hunting is a sign of their intelligent nature. They don’t have any teeth but a large Baleen plate with bristles that traps the prey. This is made from keratin, the same material as your fingernails. Also known as whale bone it was used for backscratchers and for corset stiffeners for plump ladies.
They are slow breeders and males reach sexual maturity at 6-10 years and 7-12 for females. One calf is born every three years and is it fed by its mother on nourishing milk for the first year of its life.
Such a large creature has little to fear in the sea but killer whales will occasionally catch them. Collision with ships may kill them outright but often they end up with trauma and wander onto beaches where they die. Long life has its drawbacks as pollutants can build up in its body so be mindful of what you flush down the toilet and drainpipe. Global warming and overfishing also have an impact as they can often become trapped in fishing nets and drown.
Levels of underwater noise is also becoming an issue as the oceans become more crowded on the surface and beneath the waves with sonar noise. This confuses the animals and forces then to change their vocalizations.
Fin whales were once relentlessly hunted and over 750,000 were killed from 1900-1970. Ireland become one of the nest countries to make our coastal waters a sanctuary for whales and dolphins. Although still endangered its numbers are slowly recovering and an average of 500 animals pass through Irish waters each year.
Its Latin name is Balaenoptera(winged whale) and Physalis meaning puffed up like a toad. The Irish Whale and Dolphin group is a group dedicated to the conservation of these unique marine animals and please check out their website at www.iwdg.ie for lots of interesting facts and upcoming events.
Comments/Questions to albert.nolan@rocketmail.com or 089 4230502. Also available to give walks/talks to schools, tidy towns, youth and community groups.