Home » Local News » This Region Must Strive for Cohesion

This Region Must Strive for Cohesion

There is no phonier ‘war’ I can think of than the one that some would still have you believe exists along the invisible boundary line between Waterford and Kilkenny.
And it disappoints me that I feel I’ve got to address the Waterford/Kilkenny ‘conflict’ yet again but in the wake of last Tuesday’s ‘Deise Today’ programme on WLR, when the issue almost melted down the show’s text machine, there was no option but to address it once more.
I am, in only one sense, uniquely disposed when it comes to the Waterford/Kilkenny relationship by virtue of regularly attending the Piltown Municipal District meetings of Kilkenny County Council, held at the Ferrybank Centre.
And this newspaper has been proud of its lengthy association with areas beyond the Waterford boundary, particularly in South Kilkenny through, for example, its relationship with the Iverk Show.
Since the Strategic Development Zoning (SDZ) for the North Quays was announced, South Kilkenny’s County Councillors have regularly enquired about the nature of the proposed development. At no stage have any of the six Councillors spoken in opposition to the project. At no stage.
Yes, they have fielded questions about it, just as Waterford Councillors have, yet one word which has been repeatedly stressed and extolled by Labour Councillor Tomás Breathnach for several years, doesn’t make for as sexy a headline as ‘land grabber’ or ‘cannibalisation’.
But it’s a word which carries much greater weight and relevance when it comes to the future development of the South East, let alone Waterford. And that word, which he has always used with consideration and cogency, is regional.
Speaking in relation to the since shelved boundary review in September 2015, Cllr Breathnach referred to the importance (whether the review went ahead or otherwise) of “a regional approach and that such an approach represents a win-win for everybody…This is a south east regional matter, and we need the region progressing together and that to me is a key factor in any future regional strategy.”
The movement of an invisible boundary line was never required for the right thing to be done when it comes to addressing service deficits in Ferrybank and its surrounding areas, which Kilkenny County Council remain responsible for. Thankfully, moves to address some of these deficits, in particular a public park and playground in Ferrybank, are now in train, and not before time. 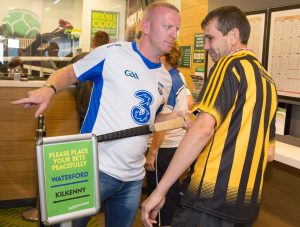 The idea of open hostility between the residents of Waterford and Kilkenny is astoundingly wide of the mark. We are not the warring neighbours that some headline writers have otherwise suggested.

That the entrances to Waterford city within Kilkenny (Sallypark and Belmont) and within ‘Waterford proper’, be it Butlerstown, Carrickphierish or the Passage Cross/Dunmore Road approach remain without prominent, historically themed signage, escapes me.
That ‘Ireland’s Oldest City’ makes it onto a sign on the approach to the Thomas Francis Meagher Bridge is nowhere near sufficient.
And as one city centre retailer has frequently referenced, the superb signage alerting visitors to the entrance to Midleton provides a top-class template which ought to be incorporated into a design for the approaches to Waterford.
And for the sake of ecumenism and as an exemplar of cross-boundary co-operation, there is no reason why the ‘reverse’ signage at Sallypark and Belmont couldn’t feature a similarly impressive ‘Welcome to Kilkenny’ representation. Such a move would probably reduce the potential for such signage to be desecrated too.
One thing is sure: nobody benefits from nothing being done on the North Quays, and were the lands within Kilkenny County Council’s gift, does anyone seriously believe that the ordinary Joe or Josephine in Ballybricken, Kilmeaden or Passage would oppose it?
Because, and as someone who drives through South Kilkenny practically every day, I’ve yet to meet someone from Piltown, Templeorum or Slieverue catter walling about the potentially spectacular rejuvenation of a unique city centre site. What’s good for the North Quay will be as good for parts of South Kilkenny as it will be for North and East Waterford, and don’t forget the New Ross catchment area either.
With Kilkenny County Council advancing its plans for the former Waterford to New Ross railway line, in addition to potential new spurs connecting the Waterford Greenway to Tramore, additional retail and entertainment provisions will unquestionably mean more regional bed nights. And forget not the Carrick-on-Suir to Clonmel ‘Blueway’ cycle trail, which is set to open later this year. Additional attractions in Waterford and our neighbouring counties increases the prospect of drawing more visitors into the South East for lengthier stays, thus increasing their regional spend, and the development of the North Quay is at the heart of a greater regional sell.
In his ‘Deise Today’ contribution, Kilkenny Chamber Chief Executive John Hurley told Eamon Keane that he and his members saw the North Quay project as being “a potentially tremendously positive development for not only Waterford but for the South East”.
But what irked a great many listeners was Mr Hurley’s claim that the project could lead to the “cannibalisation of other locations, be they the Kilkennys, Clonmels, Wexfords or whatever”. I found the use of such language as unfortunate, regrettable and as hyperbolic as any negative headlines created by the Boundary Review.
Why would Waterford wish to replicate what’s already in place elsewhere in the region when it comes to a potential retail offering? Does anyone seriously think that those behind the SDZ and its development haven’t considered this already?
The North Quay site provides planners with an opportunity to create an offering which isn’t currently available in the South East, and by the way, John Hurley wasn’t wrong when suggesting to Eamon Keane that a joint retail strategy is required within the region.
This is Waterford’s time, and my goodness have we been waiting for it, but the language of cohesiveness is what we need now across that invisible boundary. We’ve had our fill of negative language. So let’s be done with it.