Time for region to back Ireland’s Ancient East?

“Dates give us authenticity, and authenticity will bring us visitors,” said Loftus Hall proprietor Aidan Quigley on Tuesday morning last, as the sun made a welcome appearance over the striking Hook Peninsula.
He was speaking at the launch of the programme of events which will mark the Hall’s 666th anniversary, a figure, by the way, which is sourced to historical record and is not, in fact, a convenient marketing gimmick.
But given the building’s long-standing reputation as one of the country’s most renowned haunted houses, added to the fact that the Loftus family moved into the house in 1666, the coincidences synonymous with this infamous site ensure that 2016 will be a year to remember across the Estuary.
Alan Quigley added: “There is no house in Australia that can celebrate its 666th anniversary, after all…and I remember meeting a German tour operator seven or eight years ago who said to me: ‘stop trying to build these big hotels, we don’t want them. We want what you have – mind your green gold. You have your countryside and you have your history’.
“And sometimes we can forget that because we live among our (built) history and countryside and we can take all of it as a given, but for other people, coming from other countries who don’t have what we have, who don’t have a country like ours where we practically trip over castles, they’re blown away by what we have, particularly along this stretch of coastline. 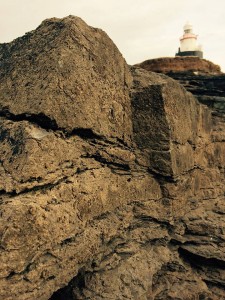 The Hook Lighthouse, which dates from the 12th Century, makes a good fit for Ireland's Ancient East.

“We have so many fabulous sites, including our own site here at Loftus Hall, and it’s incumbent upon us to look at all its historical aspects because today we sell a product built on what’s come before us, and we also look forward to what lies ahead.”
A short drive from Loftus Hall, Baginbun marks the site where the first Norman footprint was made upon our soil, “where Ireland was lost and won”. Closer still sits the Hook Head Lighthouse, at the tip of this windswept peninsula, with the Great Saltee visible to the east and Brownstown Head, Dunmore East and the Comeraghs to one’s west.
While this newspaper would argue that Hook Head ought to have marked the most easterly point of the Wild Atlantic Way, Fáilte Ireland has decreed that the Hook, along with the Waterford Estuary and award-winning Copper Coast is part of Ireland’s Ancient East.
And given that this would appear to be the hook upon which we must hang our tourism promotion hat, perhaps it’s time we all weighed in behind this new promotional drive.
Also speaking at Loftus Hall on Tuesday last, Fáilte Ireland’s Laura Woods said that the Ancient East concept has already led to the creation of 30 new tour programmes, and drawn 270 international journalists from 14 countries to sample its historical and cultural wares.
“It is intended to match and complement the Wild Atlantic Way, and the attitude of international tour operators to (the Ancient East initiative) has already been incredibly positive…and in 2016, year one of this new brand, €18 million is being invested.”
Ms Woods added: “The visible presence of the brand will appear throughout the destination in the coming months. County boundary signs will signify to visitors that they are in Ireland’s Ancient East and the first phase of orientation signage will appear at key visitor attractions…which will inform visitors of other things to see and do in the area.”
Among the new attractions, The Norman Way will tell the story of the Norman invasion of Ireland, bringing tourists from Lady’s Island, into New Ross, and will also take in the wider impact the Normans had in the region, both in Waterford and Kilkenny.
And when one considers the tremendous strides that have been made in telling Waterford’s Norman story at Reginald’s Tower, and the OPW’s refurbishment and restorations works at Carrick-on-Suir’s Tudor Manor, a positive platform is emerging.
Think about it: a thousand years of history in a thousand footsteps in Waterford, the Butler Trail, taking in Carrick, Cahir and Kilkenny, as well as the Norman Way linking three counties in the region. Those castles we’re fortunate to trip over, the currency of culture and heritage, is an area ripe for further development and positive exploitation.
Our built heritage does count for something, and that we also have the spectacular coastline and mountains on our doorsteps puts an onus on us natives to also make more of what we have. That ‘green gold’ does count for something and offers hay to be made in more than just the literal sense.
That these developments would be further championed by the Three Sisters 2020 bid succeeding in securing European Capital of Culture status represents a tremendous opportunity for the region.
And, as those who attended Loftus Hall learned last week, the Waterford/Kilkenny/Wexford bid is currently carrying the favourites’ tag to see off Limerick and Galway and land the big prize.
As Three Sisters spokesman, Wexford native and Corner Boy frontman Mick D’Arcy put it: “We’ve tended to be an incredibly modest region, and I think it’s time we all do what we can to amplify and promote the many good things we have at our disposal, here in the south east. This (Three Sisters) bid is something that’s never been done before, it’s a new approach, and it’s all about showing this region at its best. And if our bid proves successful, it’s going to represent a fantastic opportunity to showcase Wexford, Waterford and Kilkenny.”
It was impossible not to pick up on the level of optimism about our tourism sector last Tuesday.
And with that in mind, perhaps the frustration that we Deisefolk felt given our exclusion from the Wild Atlantic Way ought to be re-invested into supporting and promoting Ireland’s Ancient East.