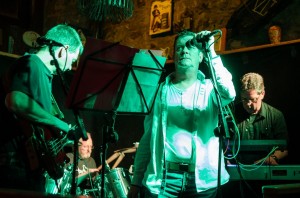 Time in the Shade played a great gig at Tramore's Vic as part of the Imagine Festival.

Reformed Waterford 80s band Time in the Shade put on a brilliant gig in Tramore’s Vic as part of the Imagine Festival and it was great to re-live some old memories with their authentic sound.
Having gone their separate ways in 1996, the group, fronted by vocalist Aidan O’Grady, reformed two years ago and will be well-known for headlining the 1985 ‘Lark in the Park’ when Waterford Arts for All was still going strong.
Speaking after the gig, the group said they’ve stayed true to their prog rock roots, with 70 per cent of their material being self-written but they sprinkled the gig with tracks by David Bowie, as well as Mike and the Mechanics.
Composed of Aidan, Harry Condon (guitar), Mick Plus (bass), Damien Foley (keyboard) and Steve Canavan (drums), one hopes their next gig will be even better supported.
Some of Damien’s former CBS pupils (he’s a great science teacher) were in the audience and provided him with some special applause on the night!
The band played a very tight and controlled set and overcame a few initial sound issues to provide the audience with a great night’s entertainment. They were one of Waterford’s best acts during the 80s and had there been a YouTube in their pomp, their class would have been on show to a much wider audience. So here’s hoping they play again soon