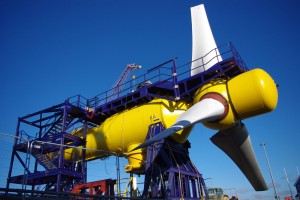 The way of the future: a tidal steam turbine.

The need to develop the potential of ocean energy is something which has been frequently discussed on these shores, as well as in Britain, for the greater part of a decade.
During a EU Committee of the Regions (CoR) discussion on October 14th, an opinion drafted by Welsh Assembly member Rhodri Glyn Thomas won support from all five CoR political groups to press ahead with a comprehensive harnessing of ocean energy.
The development of such technologies would aim to harness the power of our seas, with Mr Thomas arguing that such a commitment “would boost energy security and enable the European Union to retain its competitive advantage in a pioneering sector”.
“Ocean energy is at the cutting edge of renewables and offers a unique opportunity to promote local jobs and sustainable economic growth,” Mr Thomas told The Munster Express in Brussels.
“But, to bridge the gap towards commercialisation, greater co-operation between public and private sector and research centres is of paramount importance.”
In Mr Thomas’s opinion, brought before the CoR, he states that, in the long term, ocean energy could be a game-changer in the decarbonisation of the economy.
His document refers to a study which suggests that ocean energy could meet 10 per cent of European electricity demands by 2050.
To achieve this potential, the opinion says, the EU, along with local and regional authorities, industry, NGOs, financing institutions and research institutes should work together “to bring ocean energy technologies to maturity”.
Indeed, the development of ocean energy was also referenced by Labour MP and Shadow House of Commons Leader Chris Bryan on BBC’s ‘The Daily Politics’ on Wednesday last.
While the UK has been particularly associated in the public eye with the development of ocean energy, the CoR opinion underlines that interest in the sector is widespread.
It also highlights the ocean energy sector’s potential to drive sustainable development and job creation across the EU in inland as well as coastal areas, contributing to the revival of small and medium-sized ports and to the development of new supply chains.
The European Commission’s recently published Strategic Energy Technology (SET) plan
acknowledges the key role of ocean energy in Europe’s future energy mix and suggests enhancing regional co-operation in the Atlantic region, echoing one of the CoR’s recommendations.
At a meeting held in Dublin on Tuesday last, October 20th, ministers from the EU’s Member States, the European Commission and key stakeholders discuss a roadmap resulting from the Ocean Energy Forum.
The meeting brought together business leaders and high-level government representatives from around Europe’s western seaboard, including Minister for Energy Alex White and his French counterpart Segolene Royale. The aim is to present a final roadmap in early 2016 and look into unlocking funding opportunities.
Speaking after the meeting, EU Fisheries Commissioner Karmenu Vella commented: “Ocean energy could meet 10% per cent of the EU’s power demand by 2050. This is a huge opportunity for the EU which currently imports more than half of its energy needs, with an annual price tag of €400 billion.”
Commissioner Vella added: “Making ocean energy a success will mean more business opportunities and more high-skilled jobs especially in coastal areas, and for companies that can use their existing knowledge in naval construction, offshore activities, or experience in hydro equipment manufacturing to move into ocean energy. With 45 per cent of wave energy companies and 50 per cent of tidal energy companies worldwide coming from the EU, we have a good chance to maintain leadership in a growing global market”.
Renewable energy from the sea can also help the EU meet its clean energy ambitions – a message Commissioner Vella will convey ahead of major climate talks to be held in Paris in December.
Both Ireland and Portugal have national ocean energy strategies, while eight other EU member states include ocean energy in national renewable energy action plans.
Ireland South MEP Sean Kelly, said that counties Waterford, Wexford, Cork and Kerry are well placed to harness such energy.
In April, when speaking at the Ocean Energy Forum, Mr Kelly stated: “Emphasis on developing renewable technologies, such as ocean energy, is vital if we want to reduce greenhouse gas emissions, increase our share of renewables and reduce our dependency on imported fossil fuels,” said the Fine Gael MEP.
Referring to initiatives in Cork (at the Marine Renewable Energy Ireland research centre) and Clare (WindWave), Mr Kelly said Ireland “is at the forefront as projects begin to take the considerable step from prototype development to full-scale demonstration”.
“There is great potential for job creation in this sector,” said Independent Cork Councillor Kieran McCarthy, who said that considerable work investigating the potential of ocean energy is ongoing at both UCC and Cork IT.
Budget 2016 committed to an additional €4.5m in ocean energy research, on top of the €10m this research sector received in early 2014. A total of €68m has been allocated by the Government for 2016 when it comes to the entire energy efficiency and renewable energy sector.
Mr Thomas said that the development of ocean energy carries a clear employment yield. “We’re talking about new jobs, new skills and a boost to ports in Wales, Ireland and throughout the EU,” he added.
“For me, this is clearly an area where Wales and Ireland can work on a collaborative manner, sharing, as opposed to duplicating research. This is clearly a sector in which both countries can be at the cutting edge of an exciting new industrial venture.”