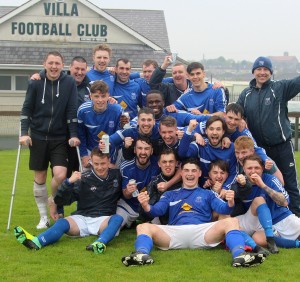 Villa 5 .Ferrybank 4
Matt Keane
The Villa will play in Division 1A next season following this truly incredible game which was played in Connors Park on Saturday afternoon. The home side knew they would be promoted if they won and they were hot favourites to take the three points against a Ferrybank team who finished rock bottom of the league and had been relegated to Division 2B prior to this match.
The men from across the bridge however forgot to read the script and certainly made the hosts fight all the way for their league title.
Everything appeared to be going according to plan when the Villa took the lead after 15 minutes. Eoghan Rea played a long ball forward from defence and Chris Fitzek gave chase but was taken down by Graeme Coady and Brian McDonald made no mistake from the penalty spot.
The Villa doubled their advantage on 37 minutes when David Hobbs headed to the net after he made contact with a left wing cross from Brian McDonald.
Three minutes later the visitors scored a wonderful goal through Jason Hennessy who met a free kick taken by right-full back Stephen Quinn. Hennessy found the net with a terrific volley from just inside the left side of the 18 yards box. The cat was well and truly thrown in with the pigeons three minutes into the second half when Steven Tracey headed home a free kick taken by Daryl Griffin out on the left.
It was clear to see that the home players were rocked by that equaliser and the Villa goalkeeper Stephen Doheny had to be at his very best to keep out a low shot from Daryl Griffin on 50 minutes but in doing so he sustained a dreadful ankle injury which required eight minutes of treatment before he was eventually carried off. He was replaced between the posts by David Hobbs, the player who had scored Villa’s second goal.
The home side regrouped and went back in front on 65 minutes through Jack Gaule who headed home a right wing cross from Adam Walsh.
Josh Aimiuhi, who came on for the second half following an injury to Chris Fitzek set up the Villa’s fourth goal on 71 minutes when he picked out Adam Walsh from the right and Walsh gleefully found the net from close range.
Josh Aimiuhi was involved in the hosts fifth goal also on 76 minutes. This time he found Jack Gaule in a good position and the latter duly hammed the ball past the Ferrybank goalkeeper Darragh Troy, who was a 68th minute substitute. Unbelievably the visiting goalkeeper Odhran Mac Cathahoil had to helped off the field following an injury so at this stage both teams had outfield players playing in goal.
With the champagne on ice in the Villa dressing room Ferrybank came back and Sam Lawless cracked the ball past David Hobbs from deep inside the penalty area on 81 minutes. Six minutes later Lawless raced into the box and again he had no difficulty beating Hobbs who looked like a very nervous character from the moment he stood in for the stricken Stephen Dohney.
Due to the unfortunate injury to the Villa custodian the match referee Noel Ryan had to play ten minutes of stoppage time and the home side somehow managed to hang on and clinch the league crown.
VILLA: Stephen Doheny (Walter Long `58) Lee Acheson, Chris Grant, Eoghan Rea, David Hobbs, Con Kirby, Adam Walsh (Eoin Daly `90) Thomas O’Brien, Jack Gaule, Chris Fitzek (Josh Aimiuhi `46) Brian McDonald.
FERRYBANK: Odhran Mac Cathahoil (Darragh Troy `68) Stephen Quinn, Graeme Coady, Alex Kinsella, Nicky Ryan, Jason Hennessy, Oisin Mac Cathahoil, Steven Tracey, Sam Lawless, Daryl Griffin, John Mulcare (Seamus Burchall “77)
REFEREE: Noel Ryan.