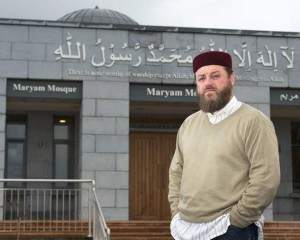 Michael Peter Noonan (Imam Ibrahim) is originally from Kingsmeadow on the Cork Road.

A WATERFORD native, who was the first man in Ireland to become an Imam, has called on all Imams around the world to unite and stand up against terrorism.
Son of Dennis and the late Irene Noonan, Michael Peter Noonan (Imam Ibrahim) is originally from Kingsmeadow on the Cork Road.
He attended Saint Paul’s Primary and Secondary schools and has three brothers and three sisters who all reside in Waterford City.
Based at the Masjid Maryam (Mosque of Mary) in Galway, he is part of the Ahmadiyya strand of the Islam.
Speaking to The Munster Express in light of the recent terror attacks in France, he said those who carry out such acts do not represent Islam.
“There are no words that can express my anger and my hurt for my fellow human beings who were slaughtered in such an evil and barbaric way,” he said.
“If I was there and if I could have saved them I would have, as a teaching of Islam is to protect, Christians, Jews and all faiths. Now the only way I can honour them is to speak out, condemning them at the highest possible level.
“I have gone head to head with radicals like Anjem Choudary. I have called on all Imams in Ireland and around the world to united and stand up against these fanatics and say ‘No more!’ You do not represent Islam or the Muslims of Ireland or indeed the world.
“I, being an Irish man, will stand shoulder to shoulder with my Irish brothers and sisters and indeed all nationalities and say ‘enough’.”
However, Imam Ibrahim said many Muslims had felt pain over the controversial depiction of the Prophet Mohammed in French magazine ‘Charlie Hebdo’.
“There is no real way I can express the hurt and pain that I and other Muslims in Ireland and indeed the world are feeling right now, and each time a newspaper decides to show a cartoon depicting the Holy Prophet (sa) in any shape or form,” he said.
“It is even more painful when he is depicted in an unethical and immoral fashion, where some cartoons are conveying a hateful message of, or about, the Holy Prophet. The most abhorrent are those expressing sexual conduct or those trying to communicate an image which is against the noble and pious character of the Holy Prophet (sa).”
He continued: “The rest of the world including many other faiths have lowered their criterion with respects to their faith and their noble Prophets but Islam refuses to lower its benchmark and to us the Holy Prophet (sa) is the benchmark of perfection in his love and obedience to almighty God.”
He explained to The Munster Express that he discovered Islam while in London in the 1980s.
“I started showing an interest in Islam from a discussion I had in Leicester Square, as some Muslims were holding an information centre and I took a leaflet from them about the basics of Islam and Muhammad (sa) the messenger of God,” said Imam Ibrahim.
“This was where my initial interest started, and sometime later, I met an Irish girl and her husband who was from Pakistan. Then I went on a holiday to Tunisia and from there my interested really grew. I investigated Islam more and found that I was very keen to accept Islam.”
He embraced Ahmadiyyat Islam and went back to university where he earned a BA (Hons) in Theology & Philosophy and a Shahid Degree at the London Institution of Islamic Theology and Languages.
He later studied at university in Pakistan and hopes to pursue a Phd in the near future.
“I spent a total of 13 years studying in Theology & Philosophy, becoming Ireland’s first qualified Imam,” he explained.
Imam Ibrahim has served as a Missionary and Imam in Iceland, the UK, and Ireland, and has worked on projects in various different countries worldwide.
He has also served as the president of the Ahmadiyya Muslim Youth organisation of UK & Ireland.
He explained his day-to-day work and the duties expected of him as Imam and as a leading member of the Ahmadiyya community in Ireland.
“My role essentially is to ensure the spiritual wellbeing of our community in Ireland and to educate the community in the theological teaching of Islam and of the doctrines of the Ahmadiyya Movement in Islam to our community,” he said.
“I hold weekly classes for all the community at various age groups. I also lead the five daily prayers at the Mosque, and deliver a sermon on Islam every Friday. I also give addresses on Islam in schools and universities on Islam. As an Imam I am allowed to conducted marriages and funerals and much more.”
In light of ‘Charlie Hebdo’ printing new depictions of the Prophet Mohammed last week, Imam Ibrahim said he hopes Muslims will “show patience and pray for peace.”